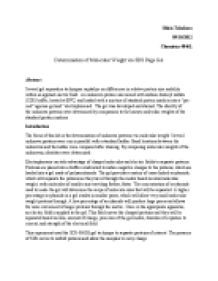 ï»¿Olivia Takahara 09/10/2012 Chemistry 4046L Determination of Molecular Weight via SDS Page Gel Abstract Several gel separation techniques capitalize on differences in relative protein size mobility within an applied electric field. An unknown protein was mixed with sodium dodecyl sulfate (SDS) buffer, heated at 80°C, and loaded with a mixture of standard protein markers into a “pre-cast” agarose gel and “electrophoresed. The gel was developed and stained. The identity of the unknown proteins were determined by comparison to the known molecular weights of the standard protein markers. Introduction The focus of this lab is the determination of unknown proteins via molecular weight. Several unknown proteins were run in parallel with a standard ladder. Band locations between the unknowns and the ladder were compared after staining. By comparing molecular weights of the unknowns, identities were determined. Electrophoresis can take advantage of charged molecules and electric fields to separate proteins. Proteins are placed into a buffer constructed to induce negative charges to the proteins, which are loaded into a gel made of polyacrylamide. The gel provides a matrix of cross-linked acrylamide, which will separate the proteins as they travel through the matrix based on size/molecular weight, with molecules of smaller size traveling farther, faster. ...read more.

10 ?L of unknown protein(s) and 10 ?L SDS sample buffer were transferred into an eppendorf tube, while 5 ?L of protein marker and 5 ?L of SDS sample buffer were transferred into a separate eppendorf tube. Both tubes were mixed and placed in a boiling water bath for approximately 3 minutes. The protein gel sample wells were rinsed several times with the running buffer using a transfer pipet to remove any contamination or air bubbles. Once prepared, the above protein samples were loaded into separate wells, the ?gel rig leads? were connected to the system power supply and the gel was electrophoresed at a voltage of 100V for an approximate run time of 2 hours. After electrophoresis, the power supply was disconnected, the gel was removed from the apparatus, washed three times with water to remove excess running buffer, placed into a tray and stained for approximately 1 hour under constant agitation using Imperial protein stain. After 1 hour, the stain was removed; the gel was rinsed with water and placed into a water bath to de-stain for approximately 3 hours, under constant agitation, with a kimwipe in place to assist in stain particle removal. ...read more.

This could occur for several reasons: The sample may have not been loaded, the provided unknown could have been contaminated, the unknown could have been mistakenly loaded outside of the well. Questions 6.1) ? Unknown 1: Carbonic Anhydrase, 29 kDa ? Unknown 2: Albumin, bovine, 63 kDa ? Unknown 3: Albumin, egg, 45 kDa ? Unknown 4: No Data ? Unknown 5: Polymerase beta, 98 kDa 6.2) The protein could be structurally denatured and then exposed to beta mercaptoethanol. The BME will reduce and cleave present disulfide bonds, resulting in the protein unfolding. If the protein was identically oligomeric, the subunits would separate into individual units. Smaller units would travel farther as they would have a reduced molecular weight. If a subunit was a dimer, the protein untis would now travel twice the distance as individual units than they would have as the dimer unit. 6.3) Using BME in the same manner, new individual units would be formed from the cleaving of the disulfide bonds. After running a gel with the restructured proteins and compared to a gel ran with the same proteins, uncleaved. ...read more.