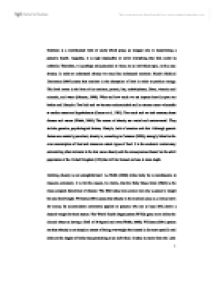 Discuss the importance of nutrition for health. It is the academic controversy surrounding what nutrients in the diet cause obesity and the consequences thereof on the adult population of the United Kingdom (UK) that will be focused on here in more depth

Nutrition is a multifaceted field of study which plays an integral role in determining a person's health. Arguably, it is nigh impossible to cover everything that falls under its umbrella. Therefore, it is perhaps only practical to focus on an individual topic, in this case obesity. In order to understand obesity we must first understand nutrition. Black's Medical Dictionary (2005) states that nutrition is the absorption of food in order to produce energy. This food comes in the form of six nutrients, protein, fats, carbohydrates, fibres, vitamins and minerals, and water (Johnson, 2008). What and how much we eat impacts heavily upon our bodies and lifestyles. Too little and we become malnourished and in extreme cases vulnerable to cardiac arrest and hypokalemia (Garner et al, 1985). Too much and we risk coronary heart disease and cancer (Webb, 2008). The causes of obesity are varied and controversial. They include genetics, psychological factors, lifestyle, lack of exercise and diet. Although genetic factors are certainly prevalent, obesity is, according to Caterson (2004), strongly linked to the over consumption of food and moreover certain types of food. It is the academic controversy surrounding what nutrients in the diet cause obesity and the consequences thereof on the adult population of the United Kingdom (UK) that will be focused on here in more depth. Defining obesity is not straightforward. ...read more.

argues, the more insulin is stimulated (a direct result of carbohydrate consumption) the more body mass we will inevitably accumulate. This in turn, he argues, causes diabetes as well as coronary heart disease, Alzheimer's and cancer. Nevertheless, the strength of the correlation between carbohydrates and weight gain is vehemently criticised by others in the medical sphere. Certainly Bray (2008) is one such adversary. In his direct address of Taubes' (2002) work he accuses him of vast oversimplification. Bray (2008) acknowledges that some diets can be too carbohydrate laden, especially with refined carbohydrate. However he argues that other body types undoubtedly suffer from obesity as an exact consequence of high fat diets. He believes there is no overwhelming evidence that carbohydrates are directly causing the diseases Taubes articulates. Indeed, Bray (2008) argues that fat is indisputably associated with diabetes and heart disease. Bray (2009) also argues that insulin secretion has only a marginal effect on weight gain. He states that Taubes' view is too 'insulin centric' (Bray, 2009, p.99). Taubes (2002) argues that insulin is the principle cause of obesity. However Bray (2009) disputes this claim arguing that insulin when elevated has an unexceptional effect on weight. He also states that Taubes' work fails to acknowledge the discovery of leptin. Leptin, as discovered by Zhang et al (Webb, 2008), is now known as the obese gene and is believed to work on satiety areas in the brain (Webb, 2009). ...read more.