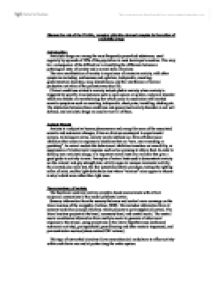 Discuss the role of the GABAA receptor chloride channel complex in the action of anxiolytic drugs Introduction Anxiolytic drugs are among the most frequently prescribed substances, used regularly by upwards of 10% of the population in most developed countries. This may be a consequence of the difficulties in classifying the difference between a pathological state of anxiety and a normal state of anxiety. The core manifestation of anxiety is experience of excessive anxiety, with other symptoms including: restlessness and agitation; tachycardia; sweating; gastrointestinal disorders; sleep disturbances; and the interference of normal productive activities of the patients every day life. Clinical conditions related to anxiety include phobic anxiety where anxiety is triggered by specific circumstances such as open spaces or spiders, and panic disorder which are attacks of overwhelming fear which occur in association with marked somatic symptoms such as sweating, tachycardia, chest pains, trembling, choking etc. The distinction between these conditions and generalised anxiety disorders is not well defined, and anxiolytic drugs are used to treat all of them. Animal Models Anxiety is a subjective human phenomenon and except for some of the associated somatic and autonomic changes, it has no obvious counterpart in experimental animals. In biological terms, anxiety may be defined as a form of behavioural inhibition that occurs in response to situations that are "new, non-rewarding or punishing". ...read more.

However, in ?3(H126R) mice the anxiolytic activity of diazepam, as tested by the light-dark choice test and the elevated plus-maze test, was not impaired compared with wild-type mice Consequently, there has been an intensive search for modulatory agents with an improved profile, and a diversity of chemical entities distinct from the benzodiazepines, but with GABA modulatory effects have been identified. The existence of endogenous ligands for the GABAA receptor complex beside GABA has often been described, but their role in the regulation of GABA action is still a matter of controversy. The progress of molecular biology during the last decade has contributed enormously to the understanding of benzodiazepine receptor pharmacology. A total of 14 GABAA receptor subunits have been cloned from mammalian brain and have been expressed/co-expressed in stable cell lines. These transfected cells constitute an important tool in the characterization of subtype selective ligands. In spite of the rapidly expanding knowledge of the molecular and pharmacological mechanisms involved in GABA/benzodiazepine related CNS disorders, the identification of clinically selective acting drugs is still to come. Neurosteroids Neuroactive steroids are a novel class of positive allosteric modulators of the GABAA receptor. Although neuroactive steroids are endogenous neuronal modulators, synthetic entities with improved oral bioavailability have recently been developed. ...read more.

McKernan et al in 2000 developed and characterised the new ligand L838417, which is a break though in this direction. L838417 binds with high affinity to ?1, ?2, ?3 and ?5 containing receptors, but not to ?4 or ?6 containing receptors, and it is similar in this respect to diazepam. However, in contrast to diazepam which is a full agonist at all benzodiazepine-sensitive GABAA receptors, L838417 fails to enhance the GABA response at ?1 containing receptors but acts on ?2, 3, and 5 containing receptors apparently with partial agonistic activity. L838417 displayed anxiolytic-like activity in wild type rats as shown in the elevated plus-maze test and in conditioned fear potentiated startle protocol. The behavioural characterisation of L838417 supports the conclusion that the sedative but not the anxiolytic-like properties of benzodiazepines are mediated by ?1 containing GABAA receptors (McKernan et al 2000). It can be expected that more advanced anxiolytic drugs would be agonists selective for ?2 containing GABAA receptors. Also, sub-type specific drugs should display fewer side-effects, such as tolerance and dependence liability and depression of respiration, due to the fact that they only act on a small population of GABAA receptors. In the future it may be possible for subtype specific ligands to be used in the treatment of not only anxiety and depression which are traditionally treated with benzodiazepines, but other neuropsychiatric disorders for which treatment has been relatively unsuccessful to date. ...read more.