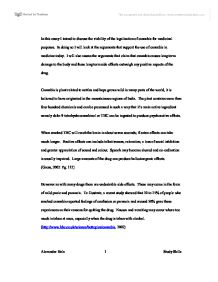 Discuss the viability of the legalisation of cannabis for medicinal purposes

In this essay I intend to discuss the viability of the legalisation of cannabis for medicinal purposes. In doing so I will look at the arguments that support the use of cannabis in medicine today. I will also assess the arguments that claim that cannabis causes long term damage to the body and these long term side effects outweigh any positive aspects of the drug. Cannabis is plant related to nettles and hops grows wild in many parts of the world, it is believed to have originated in the mountainous regions of India. The plant contains more than four hundred chemicals and can be processed in such a way that it's main active ingredient namely delta-9-tetrahydrocannabinol or THC can be ingested to produce psychoactive effects. When smoked THC will reach the brain in about seven seconds; if eaten effects can take much longer. Positive effects can include talkativeness, relaxation, a loss of social inhibition and greater appreciation of sound and colour. Speech may become slurred and co-ordination is usually impaired. Large amounts of the drug can produce hallucinogenic effects. ...read more.

Furthermore a postal survey was carried out amongst patients self medicating in the UK and in the States. Over 90% of these people reported a beneficial effect on their condition. (IBID, 2002) Much of the evidence concerning the use of cannabis is in the form of case studies. While these have much more relevance to sufferers than clinical tests, they do not stand up as scientific evidence on their own. Unfortunately the laws prohibiting the use of cannabis have hampered the accumulation of much clinical evidence. Therefore many sufferers have resorted to obtaining cannabis illegally to relieve their symptoms. This could be seen as a catch twenty-two scenario. Concrete evidence to support the legalisation of cannabis can't be obtained without undertaking clinical tests and gathering scientific evidence by means of clinical tests are hampered by the fact that the subject drug is illegal. (http://www.bma.co.uk, 2002) To sum up, in the words of Lester Grinspoon an associate professor of psychiatry at Harvard Medical School, in the United States. "It has been well known for thousand of years that cannabis has medical uses. ...read more.

It is concluded that all this evidence points to a strong, long-lasting action on the brain. Cannabis is not a physically addictive drug like for example, Heroin. It may be psychologically addictive however as heavy users have been known to display aggressive impulses if their supply stops suddenly. (IBID, 2002) Cannabis has a higher tar content than tobacco so smoking cannabis can involve the same proven health problems as smoking. Including bronchitis, emphysema and lung cancer. This is supported by research carried out by the British Medical Association which showed that smoking herbal cannabis can mean inhaling as much as three times the amount of tar contain in one single cigarette. In conclusion, cannabis has many positive aspects but in my view should remain a class C drug. This is because of a lack of information on the long term side effects of the drug, which in itself is due to the fact that few long term studies have been carried out and that the drug itself is illegal. In addition I feel that the legalisation of cannabis should be considered when conclusive studies have been carried out to identify what long-term side effects there are and whether they outweigh the obvious benefits. ...read more.