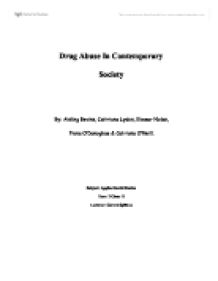 Drug Abuse In Contemporary Society By: Aisling Bevins, Caitriona Lydon, Eimear Nolan, Fiona O'Donoghue & Catriona O'Neill. Subject: Applied Social Studies Year: 2 Class: X Lecturer: Gerard Spillane In the following assignment we will be looking at drug addiction and substance abuse among society. Firstly we shall define terms such as 'drugs', 'substance abuse' and 'dependence'. We will then look at the sociological perspective of drug abuse and its seven sociological stages; how age and peer pressure can result in this type of abuse, and the four stages linked with peer pressure; the main drugs being abused along with the physical and emotional effects on the abuser; the effect on the abusers family; and finally the range of services available for substance abusers and addicts. The term 'drug' can be used to refer to any substance (other than food) that chemically alters the functioning of an organism. Since ancient times people have used drugs to stimulate or relax, to bring on sleep or prevent it, to enhance ordinary perceptions, or to produce hallucinations. Substance abuse is a pattern of use that displays many adverse results from continual use of a substance. The characteristics of abuse are a failure to carry out obligations at home or work, continual use under circumstances that present a hazard (such as driving a car) and legal problems such as arrests become evident. Dependence is when a drug user feels the need to continue in a compulsive manner the use of substances, despite the problems related to this substance. Increased amounts are needed to achieve the desired effect or level of intoxication so the users tolerance for the drug increases. Substance abuse and dependence cuts across all lines of race, culture, educational, and socio-economic status, leaving no group untouched by its devastating effects. A recent survey estimated that about thirteen million citizens of the United States had used an illegal substance in the month preceding the study. ...read more.

Due to this a variety of street names have come into use like grass, hash, weed, pot, etc. The effects of Cannabis are almost instant on the body and mind, lasting approximately three to four hours. Many users become talkative and giddy with feelings of relaxation contentment and happiness, depending on their mood before use, with alterations to senses of sight and hearing. Of two hundred New York City users studied, they replied that they felt more peaceful and relaxed. 46% mentioned these feelings without being prompted; 36% became 'turned on' sexually; 31% believed their thoughts were more profound and philosophical; and 29% thought events were comical. Physical effects found were clumsiness, slurred speech, slow reactions, dilated and redness of the eye with nausea, diarrhoea and occasional vomiting. Overdoses are rarely reported but some known side effects are: rapid heartbeat, panic attacks, paranoia and flash back. Recent research has shown that continuous use affects abilities to learn, causes minor periodic memory loss and lowers sperm count, however, effects cease after abuse has halted. Like with the use of cigarettes, the functions of the lungs are impaired and the immune system is weakened, but effects are greater with cannabis use as it is five times more potent than regular cigarettes. Amphetamines/stimulants were discovered by a German physicist in 1887, and were first used mainly for medical purposes. The most common amphetamine abused is Speed, which is commonly in tabulated form, but also available in a white powder, which is absorbed into the body inhalation, rubbing on gums, ingestion or intravenously. The abuser of amphetamines finds increasing energy levels, alertness and self-confidence as it stimulates the motor activities, i.e. walking, talking and dancing, which in effect increase heartbeat while lowering calcium levels. Minor long-term effects can be loss of teeth with loss of dentine due to rubbing on gums, damage to lining and septum of the nose from snorting. ...read more.

Narcotics Anonymous consists of recovering addicts who meet regularly to help each other stay clean. This is a program of complete abstinence from all drugs. There is only one requirement for membership: the desire to stop using and the willingness to try a new way of life. The County Waterford Community-Based Drugs Initiative was established in November 1999 and its aims were to increase awareness of drug-related issues, develop strategies for the reduction of demand for drugs, support local communities in responding to local needs relating to drug issues and also to improve the quality of life of those affected by drug misuse. The project is currently involved in many initiatives. It provides drug awareness programmes to youth groups and schools. It runs parent support groups and it promotes the development of drug policies in various organisations. In doing this assignment we have come to the conclusion that due to changing attitudes in contemporary society, drug abuse has become a prominent issue. As we can see, it is the teenage adolescent years that are most vulnerable to being subjected to drug abuse, as they are most easily influenced and experimentation is high among their peer groups, and this is where more intervention and prevention should occur. We have outlined the most commonly used drugs and their physical and emotional effects. However, we believe that more research should be done in this area. We have discovered that drug abuse has many adverse effects, not only on society and the user, but also on the family. The effects of drug abuse on the family can be both abundant and severe and because of this, substance abuse poses a serious threat to the family unit. For this reason, in our opinion, where a drug problem exists, family security cannot. It is our concluding thought as a group, that drug prevention schemes should be implemented into every school as part of the students' curriculum. It is our combined view that equal emphasis should be placed on drug prevention as well as drug treatment. ...read more.