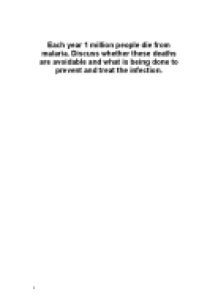 Each year 1 million people die from malaria. Discuss whether these deaths are avoidable and what is being done to prevent and treat the infection

The recombinant virus could be used to manufacture a cheap malaria vaccine in large amount, all that is needed to do is harvest infected tobacco or tomato plants and process them for immunogenic proteins. Another drug still in the experimental stage is NITD609, which although so far has only been tested on mice, has promising results. The drug is said to be able to fight the parasites that cause malaria, as the mice injected with the drug were free from malaria after just one dose. Costs in the USA for malaria research come in at $612 million, showing that substantial efforts and funding is being put in (The Economist, 22 Oct 2011). However this could be used for funding the preventative methods and cures that we already have for malaria, controlling it before a new vaccine is even needed. A treatment that has shown to work already is Intermittent Preventative Treatment (IPT). IPT is the dispensation of a course of an anti-malarial treatment to a certain amount of the population, whether they currently have malaria or not. The purpose of this is to reduce the malaria burden in the specified population. This is especially important for children and pregnant women. While this has been set out in the WHO?s Malaria Report 2010, it still needs wide scale implementation to work, and there is not enough funding for this. The first thing that is stopping malaria from being a disease of the past is that eliminating malaria in a stable country is a lot easier than doing so in an unstable country. ...read more.