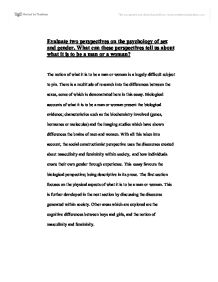 Evaluate two perspectives on the psychology of sex and gender. What can these perspectives tell us about what it is to be a man or a woman?

For example: research into masculinity in schools by observation and discourse analysis, suggest two themes, one of which is ...`masculine identities are constructed through power relations...partly produced by having control over others, access to resources of some kind, or special social status or practices that others do not have. (Wetherell, 1996). To support this notion Francis (1997, 1998) observed school children (aged 7 to 11 years) in imaginary play. Francis found that children played in gender typical roles; boys took on typically masculine roles and the girls took ok typically feminine roles. `Francis interprets the children` s constructions of oppositional gender roles to be part of a process of identity maintenance. ` (Gove and Watt, 2004) Money and Erhardt (1972) conducted a study of differences in behaviour and cognitive skills between boys and girls. They looked for a correlation between the effects of progestin on girls and if they were more masculinized than other girls whom had not been subjected to progestin. The things they looked for ranged from, whether they played with boys or girls toys, acted in tomboyish ways and what sort of clothes they wore (it is important to take into consideration the context of what it is to be boyish or girlish, it is open to interpretation and can be different amongst cultures). ...read more.