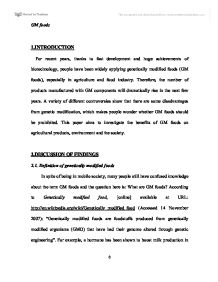 1.INTRODUCTION For recent years, thanks to fast development and huge achievements of biotechnology, people have been widely applying genetically modified foods (GM foods), especially in agriculture and food industry. Therefore, the number of products manufactured with GM components will dramatically rise in the next few years. A variety of different controversies show that there are some disadvantages from genetic modification, which makes people wonder whether GM foods should be prohibited. This paper aims to investigate the benefits of GM foods on agricultural products, environment and the society. 2.DISCUSSION OF FINDINGS 2.1. Definition of genetically modified foods In spite of being in mobile society, many people still have confused knowledge about the term GM foods and the question here is: What are GM foods? According to Genetically modified food, [online] available at URL: http://en.wikipedia.org/wiki/Genetically_modified_food (Accessed 14 November 2007): "Genetically modified foods are foodstuffs produced from genetically modified organisms (GMO) that have had their genome altered through genetic engineering". ...read more.

Improving the nutritional content of cow's milk, for example, could help both humans and animals combat famine. Based on given information above, humans may benefit greatly by consuming GM foods because obviously these foods will be healthier, more nutritious, and even safer. 2.3. Environment impacts of genetically modified foods Secondly, genetically modified foods also have a great influence on environment. Genetically modified crops that allow reduction in insecticides could have a positive effect in terms of environmental impacts. There has been a steady fall in the use of herbicides and insecticides since the application of GM foods. Genetically modified plants which can kill any kind of insect pests without harming beneficial insects or the environment will soon pop up in farmers' fields. As long as the GM foods do no harm to our healthy, using them is a wise method to converse our environment. On the other hand, a mass production can be made with the development of the GM foods. ...read more.

These vaccines would be produced inside a genetically modified plant as it grows. For example, an edible vaccine against Hepatitis B, Norwalk virus, from a genetically modified sweet potato, has been developed. Vaccines produced in this way can be shipped, stored, and administered at a low cost to patients in poorer countries. They also raise hope of widespread inoculation in developing countries. In short, GM foods offer additional opportunities to increase global food security and play an important role to help the poor. 3. CONCLUSION In conclusion, genetic engineering, which is being used in a variety of ways in the food industry, focuses on increasing the yields of various foods and creating products with superior qualities. Also, GM foods have the potential to solve the world's malnutrition problems and to help protect the environment by reducing reliance upon chemical insecticides. Despite a lot of argument against the application of GM foods, it is recommended that the governments should pay more attention to these foods so that they can be widely accepted and mass-produced in every country, especially in developing ones where farming methods need modernizing. ...read more.