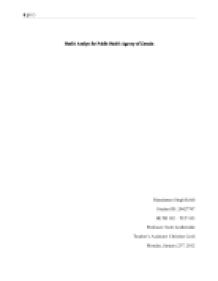 Health notes. The Public Health Agency of Canada (PHAC) has narrowed its search down to three potential chronic conditions which include: asthma, arthritis, or depression. Before one specific disease domain can be talked about, some background on the pre

Health Analyst for Public Health Agency of Canada Ripudaman Singh Kohli Student ID: 20427787 HLTH 102 - TUT 103 Professor: Scott Leatherdale Teacher's Assistant: Christine Czoli Monday, January 23rd, 2012 The Public Health Agency of Canada (PHAC) has narrowed its search down to three potential chronic conditions which include: asthma, arthritis, or depression. Before one specific disease domain can be talked about, some background on the prevalence (the number of people who have the disease) of each condition in the country of Canada must be discussed. According to Asthma Society of Canada (ASC) (2012), asthma can be described as a "chronic inflammatory disease of the airway" which causes shortness of breath, tightness in the chest, coughing, and wheezing. By examining the statistics provided by Statistics Canada, the prevalence has been increasing over the past few years. In 2010, out of the entire population of 34 million (approximation) - 7.21% had asthma - 1,016,082 males and 1,430,386 females, the cumulative statistics include age groups from 12 - 65 and over (Statistics Canada, 2010). It can be said that asthma is prevalent among a wide group of persons around Canada. According to PHAC (2003), arthritis is one of Canada's most common chronic conditions which is the leading cause of pain, physical disability and use of health care services. Arthritis makes up a large group (100 types) of disorders which affects the joints, ligaments, tendons, bones, and other components of the musculoskeletal system (ASC, 2012). ...read more.

As provinces both are advanced, but from the statistical standpoint, it seems that Ontario is more industrialized than Quebec. A mere 1.04% more Ontario Residents have Asthma when compared to Quebec in 2010, which roughly adds up to 355,000 more individuals (Statistics Canada, 2010). This is due to the fact that the "triggers" for asthma are more prevalent in urban areas due to smog and other pollutants compared to rural areas. Thus, women have a higher risk for developing asthma compared to men. As for arthritis, on average in 2008, 15.3% of Canadians who were aged 12 or older reported a diagnosis of the chronic condition. The prevalence of males was approximately 6.5% lower than females, 1.7 million and 2.6 million; males and females respectively. Another significant trend which arthritis has in Canada is that the prevalence of arthritis in youth is approximately 2.3% (males and females) while the elderly are significantly at much greater risk. In the elderly 1 in 3 of males and 1 in 2 of females reported diagnosis of Arthritis in 2008 (Statcan, 2008). Last but not least, Aboriginal Canadians are hit harder by arthritis compared to non-Aboriginal Canadians. The aboriginal women are affected the most, a mere 70% aged 65 and older live with the disease, which is compared to the 50% of non-Aboriginal women in the same age group (The Arthritis Society, 2012). The contrast between Aboriginal Canadians and non-Aboriginal Canadians may be due to the difference in cold temperatures which both different populations live in. ...read more.

These contribute more towards health problems when compared to asthma and arthritis. Chronic conditions such as asthma and arthritis do not have such external factors but depression is even more targeted towards the population that individuals with other chronic conditions may develop depression. The fact that it affects many groups of people including people of all ages, educational and income levels, and cultures makes it more easy to "catch" just as easily a cold is transmitted (CMHA, 2012). To cure this "cold", individuals must consult their physicians; it is a fact that once people are diagnosed with depression, help can make a difference in 80% of people who are affected (CMHA, 2012). Depression often leads to mood disorders which lead to suicide. According to CMHA (2012), suicide accounts for 24% of all deaths which occur among 15- 24 year olds and 16% among 25-44 year olds. All the social stigma present to mental illnesses presents a barrier in order for individuals to get help (CMHA, 2012) which must be eliminated in order to have a reduction in the prevalence of the chronic condition Canada-wide. In accordance with all the negative effects of depression, economic costs of mental illnesses take a great hit on Canada's health care system ($7.9B in 1998) (Health Canada, 2002). Even though economic cost numbers are from 1998, it suggests that the values have drastically increased today. Hence, the health care system also has to distribute funds evenly across chronic conditions in Canada to be more effective. ...read more.