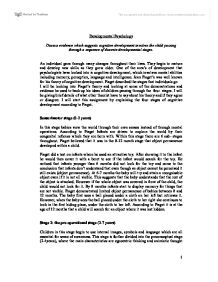 How the communication cycle is used to communicate in difficult, complex and sensitive issues

Developmental Psychology Discuss evidence which suggests cognitive development involves the child passing through a sequence of discrete developmental stages. An individual goes through many changes throughout their lives. They begin to mature and develop new skills as they grow older. One of the area's of development that psychologists have looked into is cognitive development, which involves mental abilities including memory, perception, language and intelligence. Jean Piaget's was well known for his theory of cognitive development. Piaget described the stages that individuals go I will be looking into Piaget's theory and looking at some of the demonstrations and evidence he used to back up his ideas of children passing through the four stages. I will be giving brief details of what other theorist have to say about his theory and if they agree or disagree. I will start this assignment by explaining the four stages of cognitive development according to Piaget. Sensorimotor stage (0-2 years) In this stage babies view the world through their own senses instead of through mental operations. According to Piaget Infants are driven to explore the world by their congenital reflexes which they are born with. ...read more.

Piaget demonstrated egocentrism with the Swiss mountain scene (Piaget and Inhelder, 1956). . The child was then asked to choose an image out of 10 showed, which represents how the doll saw the scene. 4 year olds found this task very hard as they only could see things from their own perspectives, hence the reason why they chose the picture that matched their view. 6 year olds showed some awareness but usually still picked the wrong image. But 7-8 year olds were consistent and chose the correct image that represented the dolls view. This demonstration therefore proved that there is truth that children are self centred and as they go through the stages they start to use mental activities. Hence the reason why 4 year olds failed the task as they were still in the preconception stage and a child at 7-8 years who was moving from the intuitive stage were highly successful doing the task. The concrete operational stage (7-11 years) In this stage children develop an operation which is a mental structure, which is basically an action performed mentally, that contains compensation, identity and reversibility. ...read more.

This is seen in the demonstration where babies lack object permanence but as they get older and reach a certain stage they gradually begin to achieve object permanence. However many researchers such as Karen Waynn(1992) have criticised Piaget for underestimating the abilities of young children. According to the findings of her experiment adding and removing objects she came to the conclusion that when objects where added or removed the baby showed a longer or shorter concentration span. This shows that infants are smarter than Piaget appreciated. Through my research into this subject I have realized that although Piaget's ideas about children's cognitive development implies a view of the child as a largely independent, isolated individual, thus excluding the contribution of other people to the child's cognitive development. In my opinion l believe not only does nature take part in cognitive development, nurture also takes part. For example being the oldest sibling l have been able to influenced the developmental stages of my younger siblings, and l have notice that children cognitive development is influenced by others and their surroundings. I am more in agreement with Bruner and Vygotsky who dismiss Piaget's 'cognitive individualist' view by stressing the social nature of knowledge and thought. Bibliography Wynn K. ...read more.