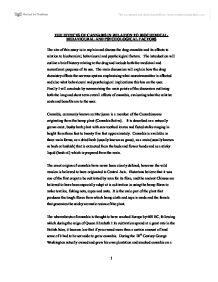 Investigate the solubility of table salt (NaCl) in distilled water at different temperatures.

THE EFFECTS OF CANNABIS IN RELATION TO BIOCHEMICAL, BEHAVIOURAL AND PSYCHOLOGICAL FACTORS The aim of this essay is to explain and discuss the drug cannabis and its effects in relation to biochemical, behavioural and psychological factors. The introduction will outline a brief history relating to the drug and include both the medicinal and recreational purposes of its use. The main discussion will explain how the drug chemistry affects the nervous system emphasising what neurotransmitter is effected and also what behavioural and psychological implications this has on the user. Finally I will conclude by summarising the main points of the discussion outlining both the long and short term overall effects of cannabis, evaluating what the relative costs and benefits are to the user. Cannabis, commonly known as Marijuana is a member of the Cannabinaceae originating from the hemp plant (Cannabis Sativa). It is described as a naturally grown e***t, bushy herb plant with saw toothed leaves and fluted stalks ranging in height from three feet to twenty five feet approximately. Cannabis is available in three main forms, as a dried herb (usually known as grass), as a resin (usually known as hash or hashish) that is extracted from the buds and flower heads and as a sticky liquid (hash oil) which is prepared from the resin. The exact origins of cannabis have never been clearly defined; however the wild version is believed to have originated in Central Asia. ...read more.

The reduced functioning of the immune system and brain damage have also been investigated and found to have no reliable proven evidence. However people who smoke cannabis over a long period of time may be prone to chronic bronchitis and respiratory problems this is because the tobacco smoked in a joint is not filtered as in a normal cigarette, the cardboard roach with a hollow centre prevents the filter mechanism from working, also joint smokers tend to inhale more deeply and for longer. (Potology p 37) Cannabis effects body co-ordination and decreases reactions in activity. The myth that intoxicating effects of cannabis, similar to that of alcohol, have been found by some research programmes to have a deleterious effect on driving performance. Even when intoxication has ceased, metabolites of cannabis may remain in the urine for up to 3 weeks. Consequently the government are planning to introduce roadside drug testing in the near future to combat this. The three main effects that are said to impair driving ability are the reduction in visual vigilance, distortions in perceptions of time and space and muscular inco-ordination. (Potology p35). A heavy user constantly intoxicated with cannabis may appear apathetic, less energetic and perform poorly at work or in today's society at school if the case maybe. The most commonly desired effects on behaviour related to anyone smoking cannabis as a social issue are the increase in conversation, the distortion of reality, feelings of intoxication, heightened feeling of well being, relaxation, elevated mood described as dreamy, contented, a warm psychic glow, or buzz. ...read more.

It seems that no long term harmful effects have been conclusively demonstrated, though the clearest physical harms are the same as smoking of tobacco which could eventually damage the respiratory system. Those that choose to drive whilst intoxicated are said to be taking a risk as driving under the influence of cannabis is a crime and causes distortion in vision and muscular inco-ordination. Many suspected permanent effects on the mind and body are probably the result of continuous intoxication and are likely to fade after the user stops smoking. Although it might not seem so in some communities cannabis is still illegal and socially disapproved of. Depending on how much cannabis a user smokes, an ounce can be purchased for approximately �60 which would normally be purchased from a dealer. However on average a user would probably smoke around �15 worth per week which in some circumstances may lead to damaging social effects as spending on cannabis can cause financial problems elsewhere. An extract taken from Potology p 43 states the following conclusion regarding the long term effects of using cannabis. The current conclusion about long term effects of smoking cannabis can be summed up by quoting the British Government's 1981 report by the Advisory Council on the Misuse of Drugs. "There is insufficient evidence to enable us to reach any incontestable conclusions as to the effects of the human body of the use of cannabis, but.... ...read more.