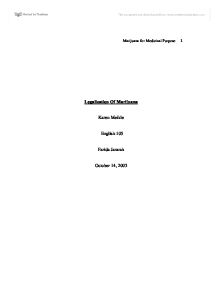 Marijuana for Medicinal Purpose 1 Legalization Of Marijuana Karen Meikle English 105 Farida Jararah October 14, 2003 Marijuana for Medicinal Purpose 2 I. Legalizing Marijuana A. Legalized for Medicinal Purposes B. Less expensive to produce II. Marijuana Therapy A. Suppresses Nausea B. Relieves Pain C. Stimulates Appetite III. Medical Benefits of Marijuana A. Relieves pain of Multiple Sclerosis B. Ease pain in Limbs of AIDS sufferers C. Stimulates appetite of AIDS sufferers D. Controls glaucoma Marijuana for Medicinal Purpose 3 Although legalizing marijuana is a controversial topic, its legalization for medicinal purposes should not be an issue because it helps in reducing pain, and is also a treatment for some terminal illnesses. A few states, (eight to be exact) the most notable California, says marijuana use ought to be legal if prescribed by a doctor for critically ill patients, and they have sanctioned growing the plant for medicinal purposes. However in the other forty two states it is known to be illegal. Marijuana should be legalized for medicinal purposes. Any health effects it may cause pales in comparison to the pain and suffering caused by lethal illnesses. There is no way to deduce whether the legalization of marijuana, for medicinal purposes only, would cause an increase in its illegal use. Marijuana Controls glaucoma, suppress the nausea induced by anti-cancer drugs, relieves the pain of multiple sclerosis, and also stimulates the appetites of those with AIDS. ...read more.

Caffeine is known to be addictive, yet soft drinks are very tasty and therefore are consumed frequently. Cigarettes contain tar that coats the lungs and causes respiratory problems, but the tobacco is grown by farmers and helps them put food on the tables of their families. Even alcohol, as deadly as it can be, has the redeeming qualities of lowering stress and helping to prevent heart attacks. All of these things are dangerous, yet legal. So why do we keep marijuana, another dangerous yet potentially helpful drug, Marijuana for Medicinal Purposes 6 illegal? So far eight states have legalized the use of marijuana for medicinal purposes. These eight states may have legalized marijuana for this purpose, but they are not the only states with terminal ill patients. True, there are other pain relievers and appetite builders, but they can cause side effects much worse than the pain the patients are going through. Alcohol, can cause many health problems, yet it is still legal to buy and consume at age twenty one. Cigarettes and other tobacco products cause problems for users, as well as those experiencing second-hand smoke. We are taught from early on in our lives that tobacco products have no real value to the user except for stress management, yet it is legal. Marijuana, is a victimless crime drug, one that if it does cause problems, they are only to the user. ...read more.

The argument is made that marijuana is a "gateway drug" that leads to use of other more deadly and dangerous drugs. But what if it was legalized? Then people could use marijuana recreationally, drug dealers would be taken out of the picture and the pressure to use the more harmful drugs would be gone. Marijuana would no longer be a gateway drug. I know that there are drugs out there that should be illegal, but marijuana is not on that list. If used sensibly and rationally, marijuana can serve the same purpose as soft drinks, alcohol and tobacco products. As with these substances, it is up to the user to be responsible while under the influence of marijuana and to conduct themselves appropriately. Marijuana for Medicinal Purposes 9 Reference: Davids, T.H. (2000). Marijuana as medicine. Soul, 11, 1999-2000. Jackson, M. (1999). Marijuana. Gale group, 11, 191-192. Robins, N. (2003, January). Legalization of marijuana. Retrieved September 14, 2003 from California State University at Los Angeles Center for Medical Studies Web site: http://www.marijuana.org Samuels, L. R., Yales, T. (2002, December 10). War over weed. Times International, 160, 62-63. Thompson, M. (1999). Legalization of Marijuana. In M. Wilson & J Duke (Eds.), Marijuana as medicine (133-138). Springfield, IL: James, Tucker, and Wilson. Watson, S. (2001). Pot fury. U.S News & World Report, 12, 2000-2001. Pre Writing Legalizing Marijuana for medicinal purposes: Pain management for illnesses Less expensive to produce Less side effects than dangerous pain drugs Controls Glaucoma Suppress the nausea induced by anti-cancer drugs, Relieves the pain of multiple sclerosis, Stimulate the appetites of those with AIDS ...read more.