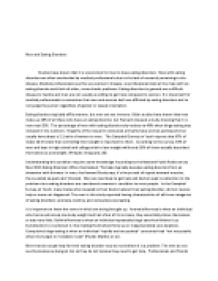 Some men want to be thinner to show off their muscles, for whatever reason it is a problem in their head that makes them feel it is okay to starve themselves or purge. While some men have a compulsive binge-eating disorder, it comforts them to eat. Ten percent of men with an eating disorder reported a history of sexual abuse. Sexual abuse affects both men and women but it is more common in women, so ten percent is a larger number than it appears. It seems that 1 in 4 men who have an eating disorder have been victims of sexual abuse. Professionals believe that the occurrence of sexual abuse play an important role in the root of an eating disorder for both men and women. In some cases, athletics is to play in a person?s eating disorder. A common sport that requires athletes to maintain their weight is wrestling. Men in wrestling receive a lot of pressure to keep weight, this sport has weight classes and once a wrestler is assigned a weight class it is difficult to move up or down classes. In order to keep their weight, the men (or women) have to diet. Though sometimes dieting is not enough so the wrestlers take to throwing up and starving themselves. ...read more.

Sodersten, Per, Cecilia Bergh, and Michel Zandian. "Understanding Eating Disorders." Hormones and Behavior 50.4 (2006): 572-78. ScienceDirect. Elsevier, 4 Aug. 2006. Web. 4 Dec. 2011. <http://www.sciencedirect.com/science/article/pii/S0018506X06001723>. This article talks about anorexia and its effect on the body. Treasure, Janet. "Eating Disorders." The Lancet 375.9714 (2010): 583. ScienceDirect. The Lancet, 13 Feb. 2010. Web. 4 Dec. 2011. <http://www.sciencedirect.com/science/article/pii/S0140673609617487>. This article defines eating disorders. It is also very educational. Woodside, Blake D. "Assessing and Treating Men With Eating Disorders." Psychiatric Times. LexisNexis Academic, 1 Mar. 2004. Web. 28 Nov. 2011. This article is about assessing and treating men with eating disorders. It talks about how uncommon men with eating disorders used to be but now professionals are seeing more it them. It seems that men do not want to be seen as homosexual and/or feel that they are not at risk or even have the disorder just because it is commonly a "women's" disease! Woodside, D. "Personality in Men with Eating Disorders." Journal of Psychosomatic Research 57.3 (2004): 273-78. Print. This is a very educational and informational journal source. The journal goes in about body mass index of men and women and how it affects them and their eating disorder. The point of the study was to show how personality affects the disorder in them and it was shown that men are less at risk to develop "perfectionism, harm avoidance, reward dependence and cooperativeness" than women. ...read more.