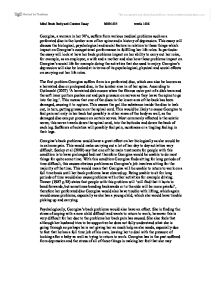 Georgina, a woman in her 30's, suffers from various medical problems such as a perforated disc in the lumber area of her spine and a history of depression. This essay will discuss the biological, psychological and social factors in relation to these things which impact on Georgina's occupational performance in fulfilling her life roles. In particular the essay will look at how her back problems impact on her ability to carry out her roles, for example, as an employee, a wife and a mother and also how these problems impact on Georgina's social life for example doing the activities that she used to enjoy. Georgina's depression will also be looked at in terms of its psychological, physical and social effects on carrying out her life roles. The first problem Georgina suffers from is a perforated disc, which can also be known as a herniated disc or prolapsed disc, in the lumber area in of her spine. According to Gutknecht (2007) 'A herniated disk occurs when the fibrous outer part of a disk tears and the soft inner portion pushes out and puts pressure on nerves as they leave the spine to go into the leg.'. This means that one of the discs in the lower area of the back has been damaged, causing it to rupture. ...read more.

One of Georgina's main activities in the past was hill walking which she now finds impossible due to the pain in her back. Due to her difficulty sitting for long periods of time and walking she would find even simple activities such as going shopping, meeting friends for a meal or going to the cinema impossible to do now. As mentioned previously, Georgina has previously suffered from depression, and feels she may be becoming ill again due to the stressful things which are happening to her. We are told by Kohen (2000) that as a woman Georgina is twice as likely to suffer from depression and as she has had it already is more likely to suffer from it again. Depression is different to just feeling low or down as it is a persistent low mood for a long period of time. When people have depression it is often so extreme that they are unable to go about their daily life as normal, also depression differs to just feeling down as the feeling can last for long time rather just a few days. There are many symptoms of depression and it can affect a person in many different ways, according to Ainsworth (2000 p7) 'depression affects how individuals feel, think, and behave as well as how their bodies work.' ...read more.

The problems that Georgina suffers from could be looked at in terms of the International Classification of Functioning Disability and Health (ICF). The ICF is a framework used by the World Health Organisation; it is described by the WHO website as a 'framework for describing and measuring health and disability' (WHO 2008). The ICF can be used to describe different factors of illnesses and shows that disability applies to more than just a select few; it recognises that people with illnesses and disabilities can also lead normal lives. The ICF is also important in Georgina's case as it 'takes into account the social aspects of disability and does not see disability only as a 'medical' or 'biological' dysfunction' (WHO 2008). In conclusion, there are many biological, psychological and social factors in relation to Georgina's herniated disc in her back which would cause her problems. The most important of these is the subsequent back pain from this which would prevent her from carrying out many of the day to day tasks that she used to do and enjoy. Also important is Georgina's history of depression and the fact that she is beginning to feel ill again. If she were to suffer from depression again there would again be biological, psychological and social factors relating to this which would impact upon her carrying out her activities of daily living. ...read more.