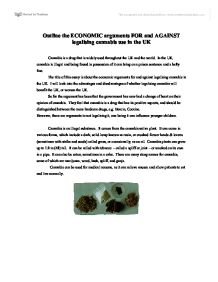 Outline the economic arguments for and against legalising cannabis use in the UK.

Outline the ECONOMIC arguments FOR and AGAINST legalising cannabis use in the UK Cannabis is a drug that is widely used throughout the UK and the world. In the UK, cannabis is illegal and being found in possession of it can bring on a prison sentence and a hefty fine. The title of this essay is about the economic arguments for and against legalising cannabis in the UK. I will look into the advantages and disadvantages of whether legalising cannabis will benefit the UK, or worsen the UK. So far the argument has been that the government has now had a change of heart on their opinion of cannabis. They feel that cannabis is a drug that has its positive aspects, and should be distinguished between the more hardcore drugs, e.g. Heroin, Cocaine. However, there are arguments to not legalising it, one being it can influence younger children. Cannabis is an illegal substance. It comes from the cannabis sativa plant. It can come in various forms, which include a dark, solid lump known as resin, or crushed flower heads & leaves (sometimes with stalks and seeds) called grass, or occasionally, as an oil. Cannabis plants can grow up to 1.8 m (6ft) tall. It can be rolled with tobacco - called a spliff or joint - or smoked on its own in a pipe. It can also be eaten, sometimes in a cake. There are many slang names for cannabis, some of which are marijuana, weed, hash, spliff, and ganja. ...read more.

This however is not proven. Cannabis is said to have relaxation effect on the mind, which is why people take it. Also people will use it for medical purposes, so other harder drugs will not be involved. It may also be used as a drug that people will get hooked on, as a replacement for harder drugs; therefore more people may take cannabis. Another reason against making it legal is that children will see that it is alright to take cannabis, as the law has made it legal. The Guardian newspaper stated that "About 49% of English teenagers say they have tried the drug - a level far higher than in any other western European country". This is not good as nearly 50% of all teenage children have tried it. The other main factor against the legalisation of cannabis is the health risks involved. Although the drug can be used for medical purposes, it does have side effects. These include impairing short term memory, and affect body coordination and slow reaction time, affecting the brain by reducing the sympathetic blood flow - which means blood vessels dilute, therefore blood pressure and pulse rate drop. Heavy use of cannabis can lead to temporary psychosis - a serious mental disturbance that can result in paranoia or depression as well as trigger symptoms of schizophrenia. The long term effects of cannabis are that there is a greater risk of cancer and heart disease, and can cause bronchitis. ...read more.

We need to define the word "drug". Is it a substance that can cause addiction? Or is it a substance that is so dangerous it can kill. Cocaine and Heroin are two life threatening drugs that can kill, but cannabis is not even on the same level as those two. Therefore if it is a drug that does not kill, I do not see why we cannot legalise it. Cigarettes and alcohol are legal, and both can kill. In Holland, cannabis is legal if smoked in a coffee shop or in the home. Because of the legalisation of cannabis, Holland has one of the lowest rates of hard drug users in Europe. The UK has one of the highest. (www.cannabis.co.uk) If cannabis is found to be useful in medical advances that it should be legalised. There is nothing more important than helping a human being live a better life, free from pain and illness. Cannabis is a naturally occurring substance, which poses far less danger than cigarettes and alcohol. It has the ability to benefit the terminally ill. We should stop wasting resources on imprisoning young people found with small amounts of this substance. Instead we should use that extra money to educate children about the dangers of hard drugs. If there is a reason that cannabis will not be legalised, then a factor would be that the government could never find an approachable way of controlling it. Also the price would be higher than it would be on the black market. ...read more.