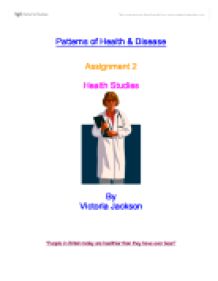 Patterns of Health & Disease Assignment 2 Health Studies By Victoria Jackson "People in Britain today are healthier than they have ever been" Discuss the extent to which this is true and evaluate the impact of social and medical changes on the health of the population. You should concentrate on mostly the last 200 years. Overall standards in heath have improved since the 18th Century for a number of reasons. These include; improved living standards, nutritional and sanitary improvements, environmental changes and technological advancements. To answer this question the essay starts with three definitions of health followed by addressing the legislation changes and general impacts that have dramatically affected our health over the years. The biomedical model was developed in the 19th Century, distinguishing health and illness to be qualitatively different with on continuum between. The model states that health is 'the absence of disease or infirmity' and is based on the idea that a malfunction is detected and treated. The World Health Organisation (WHO) defines health as 'a state of complete physical, mental and social wellbeing and not merely the absence of disease or infirmity. This is also referred to as the bio-psycho-social model. (Class Notes, 18 October 2004) The final model is the 'public health model', which relates to the socio-economic model it defines; 'the science and art of preventing disease, prolonging life and promoting health, through the organised efforts of society'. ...read more.

Although this changed in 1898 when a 'conscientious objection' clause enabled parents to be excused the compulsory vaccination of their children. The overall effect on health of this act was mortality rates dropped especially those in infants, due to people had a stronger immune system to cope and live through the disease and illness surrounding them. (www.netcentral.co.uk accessed on 10 December 2004) Another pioneer is Louis Pasteur, he combated the problem that Jenner had which was finding why disease spread. By 1865 he was convinced that disease was caused by micro-organisms or germs. His work led to a great impact on surgery and public health, people started to clean instruments and sprayed antiseptic solutions to kill germs. Robert Koch was the person who related Pastuers germ theory to human illness. (MCALEAVY, T. PATTERSON, D. WHITTOCK, M. 2002) In 1866 the 'sanitary act' was passed with thanks to Dr.John Simon, who was the medical officer of the Privy Council. In a report he put together, he wrote 'time had come for unifying action'; subsequently leading to the creation of the act. It required local authorities to undertake sanitary regulation. Inspectors were appointed for towns and general powers set out for sewage disposal and supply water. Overcrowding was made illegal and penalties were issued to persons suffering from dangerous infectious diseases, although these powers were augmented in 1870. ...read more.

As we age, our medical needs become more demanding, higher maintenance and more preventative care is required. Despite the improvements in healthcare new challenges still exist, the increasing number of elderly patients require treatment that is more expensive. The lifestyles of people in Britain have dramatically changed over the years and we are becoming a more stress related society who crave on materialistic things. All of the findings suggest that everything has been done and is made available to us to be healthier but it is down to the individual to take it and make it happen, just as Acheson found! There will always be inequalities in health and we will always have different social classes. Those of higher class can afford to go private and have problems sorted quicker than those of lower social class, who tend to have an extremely long wait on the NHS to sort problems out. Three points to consider are; there are clear signs of emergence or re-emergence of certain illnesses, including infectious such as TB and AIDS and conditions such as asthma. If every age has its disease-ours may be AIDS or cancer. Secondly, there are adverse trends in important risk factors such as obesity, fitness levels and smoking, and finally, most disturbingly of all, are the marked differences in class, gender and ethnic inequalities in health within the population. Overall health has generally improved but not as much as it should have. ...read more.