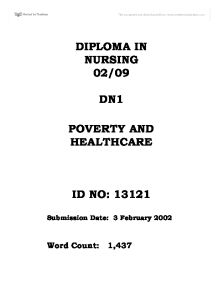 DIPLOMA IN NURSING 02/09 DN1 POVERTY AND HEALTHCARE ID NO: 13121 Submission Date: 3 February 2002 Word Count: 1,437 The aim of this assignment will be to explore poverty and how it influences peoples understanding of healthcare. I will be focussing on mental health clients and welfare benefits. I will aim to define poverty, discuss the effects it has on my client group, and their perception of healthcare. For reasons of confidentiality, pseudonyms will be used for any client referred to in this assignment. Poverty then, for most people, according to Hallawell & Brittle (1995), is a condition to which most of us strive to avoid, an unacceptable concept which is far removed from modern day living, and only affects 3rd World countries or was from past eras. Poverty is a term with negative connotations, associated with words such as deprivation and lack. Being poor is to lack what others - the 'comfortable' possess. It is a stain or stigma on an individuals or social group's identity ( Brooking, Ritter and Thomas 1992). There are two categories of poverty - absolute and relative poverty. Both these definitions have an adverse influence on an individuals health. (Calman 1997) Absolute, as defined by Walsh Stephens and More (1999) is basic human needs in terms of shelter, clothing and food. Anything less than minimum standard needed to live on, was said to be below the 'poverty line', and living in absolute poverty. ...read more.

If she did decide to go out, then she would have to do without her cigarettes, which she considered as her luxury. Paul (not real name) received enough benefit each week to cover his food, electricity, rent and gas bills, and only just managed to get by, but found it a struggle. "I wish I could get a job I just want to work, I would be getting more money to live on than I do now, I'd do anything" Benefits were used for basic essentials of food, heating and lighting, housing costs and transport, which to say the least is hardly enough, but to be without this financial assistance would mean that they would have a poorer diet, and would be unable to meet basic needs. The inability to visit family and friends through lack of funds would mean social isolation, which in effect would cause an adverse effect on the client's mental health. (Welch, Lewis and Sloggett 1998) The clients also relied on the benefits for attendance at the day centre as well as support groups - many would be housebound otherwise. A simple item such as a telephone is essential as no access would probably cause social isolation. There could be a link between people with mental health problems receiving benefits and staying well, as it helps them to maintain to some degree a quality of life. It is evident that these clients have more to worry about, than merely having a disabling condition, they also have to deal with living on the edge and being stigmatised (Watkins 2000). ...read more.

The two categories of poverty which are relative and absolute poverty, have an important impact on an individuals health status (Chard, Lilford, Gardiner 1999). Mental health clients are not exempt from poverty. For individuals with mental health problems, it is evident that poverty walks hand in hand with other excluding factors which they are unfortunate enough to have. Stigmatisation is then added to an already ostracised lifestyle (Field and Taylor 1998). Many find themselves existing on welfare benefits. It would also appear that many clients may be eligible for a higher level of benefit which would give them a better standard of living, but because of stigmatisation by healthcare professionals caused by their illness, many prefer to either consult outside agencies or even remain in the poverty to which they have become accustomed to (Welch, Churchill, Lewis, Mann 1998). As healthcare professionals it seems that being biased towards the client and his socio-economic and medical situation, presumably helps us to make up our mind in relation to the health care which they will receive. This is one of the reasons why clients remain passive, because professionals will treat them with values based on social assumptions (Chard, Lilford, Gardiner 1999). Given that benefits are the main source of income of these individuals, healthcare professionals must acknowledge clients powerlessness which has been instigated by their disadvantage. We should make ourselves accessible to clients and act as their advocate. To this end, if we do our best to reduce health inequalities, then surely the health of the nation will improve. ...read more.