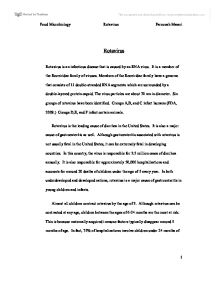 Rotavirus Rotavirus is an infectious disease that is caused by an RNA virus. It is a member of the Reoviridae family of viruses. Members of the Reoviridae family have a genome that consists of 11 double-stranded RNA segments which are surrounded by a double-layered protein capsid. The virus particles are about 70 nm in diameter. Six groups of rotavirus have been identified. Groups A,B, and C infect humans (FDA, 2009.) Groups D,E, and F infect certain animals. Rotavirus is the leading cause of diarrhea in the United States. It is also a major cause of gastroenteritis as well. Although gastroenteritis associated with rotavirus is not usually fatal in the United States, it can be extremely fatal in developing countries. In this country, the virus is responsible for 3.5 million cases of diarrhea annually. It is also responsible for approximately 50,000 hospitalizations and accounts for around 20 deaths of children under the age of 5 every year. In both underdeveloped and developed nations, rotavirus is a major cause of gastroenteritis in young children and infants. ...read more.

The biggest problem is diarrhea. The diarrhea is usually watery and does not contain blood or mucous. It is important to consume plenty of liquids in order to keep hydrated. Neurologic symptoms can occur in extreme cases as a result of an electrolyte imbalance or direct viral infection in the central nervous system. Rotavirus is also associated with aseptic meningitis, necrotizing enterocolitis, acute myositis, hepatic abscess, pneumonia, Kawasaki disease, Sudden Infant Death Syndrome and Crohn's disease. Gastroenteritis, resulting from rotavirus, can lasts for months in children with immunodeficiency. Diagnoses of rotavirus involves taking a stool sample or performing a rectal swab. Detection of rotavirus is routinely done with an enzyme linked immunosorbent assay (ELISA) test for rotavirus. ELISA can be used to detect antigen late in the course of illness. For quick diagnosis, latex agglutination kits may be used. An enzyme immunoassay or (EIA) is the most widely used test used to screen stool samples. ...read more.

In many hospitals, people with rotavirus are kept isolated from other patients. Because the virus is so prevalent, it is very difficult or even impossible to prevent rotavirus infection. Even places with excellent standards of hygiene and sanitation can become contaminated. Vaccination is the most effective preventive measure. An older vaccine to prevent rotavirus was withdrawn due to adverse side effects. The United States Food and Drug Administration approved a live virus vaccine for use in infants. However, this recommendation was withdrawn in 1999 because the vaccine appeared to increase the risk of intestinal problems. The vaccine was known as RotaShield. In 2006, the FDA approved a new rotavirus vaccine. This vaccine RotaTeq is a live oral vaccine for use in children. The Advisory Committee on Immunization Practices (ACIP) voted to recommend a newly licensed vaccine to protect against rotavirus. Studies have shown that the vaccine prevents about 74% of all rotavirus cases, about 98% of severe rotavirus cases, and about 96% of hospitalizations due to rotavirus. Three doses of the rotavirus vaccine are recommended at 2, 4, and 6 months of age. ...read more.