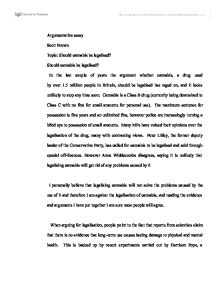 Should cannabis be legalised?

Argumentative essay Scott Brown Topic: Should cannabis be legalised? Should cannabis be legalised? In the last couple of years the argument whether cannabis, a drug used by over 1.5 million people in Britain, should be legalised has raged on, and it looks unlikely to stop any time soon. Cannabis is a Class B drug (currently being downsized to Class C with no fine for small amounts for personal use). The maximum sentence for possession is five years and an unlimited fine, however police are increasingly turning a blind eye to possession of small amounts. Many MPs have voiced their opinions over the legalisation of the drug, many with contrasting views. Peter Lilley, the former deputy leader of the Conservative Party, has called for cannabis to be legalised and sold through special off-licences. However Anne Widdecombe disagrees, saying it is unlikely that legalising cannabis will get rid of any problems caused by it I personally believe that legalising cannabis will not solve the problems caused by the use of it and therefore I ...read more.

In addition the British Government have made television ads to inform the public of this, who have been known to think of cannabis as a 'safe drug,' which shows the extent of the Governments concerns. A lot of people point to the Dutch as proof that legalising cannabis does not lead to higher usage of the drug. The pro legalisation of cannabis lobby, say Holland is the embodiment of a mature, healthy nation that tolerates cannabis because it can accept alternative lifestyles. This appears to be confirmed when reports published by the EU Drugs Agency in Lisbon show that Britain has the highest percentage of cannabis users while Holland came in fourth on the list. Campaigners for the legalisation of cannabis tell us that there are less drug-related crimes in Holland and fewer criminals selling the drug than in any other country, and the drug is taxed, creating more money for the government. ...read more.