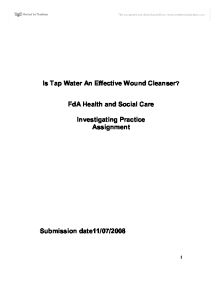 For the purpose of this assignment I have chosen to investigate the use of tap water for cleansing wounds. This subject has been chosen as a TAP working within General Practice, wound management will become a significant part of my role. I will conduct a thorough literature review surrounding the subject chosen and also determine if tap water is an effective wound cleanser. I will investigate the difference, if any, in the infection rates of wounds cleansed with tap water or normal saline. I will give definitions of wound cleansing and why it is performed. I will discuss the sources of evidence I find and conclude the findings within this review. Nutrition also plays a big part in wound healing and it is fundamental to the wellbeing of the patient with a wound, this will also be discussed.

Trevelyan (1996) states that nursing practice does not always reflect research and nurses have a tendency to be ritualistic when it comes to cleansing wounds rather than using evidence based research. McKenna et al (1999) state that it is unacceptable for health care not to be based on sound evidence of its effectiveness, therefore, Practitioners are increasingly required to question their own methods (Towler, 2001b), and back up their practice with research-based evidence (NMC, 2002a), to ensure effective clinical practice. Accountability needs to be considered when making decisions about wound management. The NMC (2002a) states that accountability is an integral part of professional practice that requires the practitioner to make judgments they are answerable for. Davies & Lawrence (1994) therefore suggest that it is essential to practice according to research based protocols and standards, and for practitioners to be empowered to make informed decisions (NMC, 2002b).

An integral part of nursing within general practice is wound management. (Morrison et al 1992) states that the purpose of wound cleansing is to “create optimum conditions at the wound site for uncomplicated healing”. (Towler 2001) defines wound cleansing as “the application of fluid to aid removal of exudate, debris, slough and contaminants”. Best practice information (2003) gives their definition of wound cleansing as “the use of fluids to remove loosely adherent debris and necrotic tissue from the wound surface”. We therefore cleanse wounds to remove any debris, slough or residue from the wound bed to create optimum conditions for wound healing.

The importance of good nutrition in the healing of wounds and the promotion of health is of paramount importance but remains of low priority in health care and insufficient numbers of patients receive a nutritional assessment. Practitioners need to become more knowledgeable about the role of nutrition in the promotion of wound healing. Whereas good nutrition facilitates healing, malnutrition delays, inhibits and complicates the process, Williams and Leaper (2000). Nutritional support is fundamental to patient care and needs vary on an individual patient basis.

According to Flannagan (1997) water has been used to treat wounds for many centuries without complication, although within clinical practice, normal saline has become the favoured solution Cunliffe & Fawcett (2002).

A comprehensive internet, journal and date base search has been undertaken to gain all the information relating to the topic to undertake the review.

This review was a systematic review carried out in 2007 by the Cochrane database of systematic reviews and cited by R Fernandez, R Griffiths which is titled “water for wound cleansing”. This study used random and quasi-randomised controlled trials comparing wound healing outcomes and infection rates of wounds cleansed with normal saline.

Eleven trials were included in this review. Seven trials were identified that compared rates of infection and healing in wounds cleansed with water and normal saline, three trials compared cleansing with no cleansing and one trial compared procaine spirit with water. The major comparisons were water with normal saline, and tap water with no cleansing. There was no difference found for chronic wounds and the risk of developing an infection when cleansed with tap water compared with normal saline. Tap water was more effective than saline in reducing the infection rate in adults with acute wounds. The use of tap water to cleanse acute wounds in children was not associated with a significant difference in infection when compared to saline. There were no significant differences in infection rates were seen when wounds were cleansed with tap water or not cleansed at all. Likewise, there was no difference in the infection rate in episiotomy wounds cleansed with water or saline. The use of isotonic saline, distilled water and boiled water for cleansing open fractures also did not demonstrate a statistically significant difference in the number of fractures that were infected.

Angeras et al (1992) studied 705 patients in a randomised study of saline versus water in treating acute traumatic wounds. Half were aged 18-35 and 77% were male. No difference of infection was noted between the groups.  Bias was reduced as doctors cleaning the wounds did not know which solution they were using. It was also felt that the nurse must ask herself whether the wound really requires cleansing at all and stated that to cleanse routinely is uneccessary and outmoded ritualistic practice, Angeras et al (1992). The author concluded that there was insufficient evidence to support or refute the routine use of water for wound cleansing in practice and that further extensive trials are required. Gannon R, (2007).

Sylvie Hampton (2003) wrote for the Journal of Community Nursing and was entitled “the use of tap water for wound cleansing”. This was also based on the random controlled trials carried out by Fernandez and Griffiths and once again results revealed no significant rate of infection or healing rates of the wounds.Hampton & Collins (2003) point out that the patient must be protected against clinical infection at all costs and hand washing, not wound cleansing, is the single most important part of that prevention particularly as cross-transmission of microorganisms by the hands of health care workers is considered the main route of spread of infections. The conclusion was that drinkable tap water appeared to provide a safe alternative to normal saline for wound cleansing and furthermore it may be the preferred choice of some patients, giving them a sense of wellbeing if they are allowed to bathe or shower prior to their dressing being changed.

The aim of this review carried out by Whaley, S (2004) was to identify whether cleansing with tap water results in higher rates of wound infection or delayed healing compared with other cleansing solutions in adults or children with acute uncomplicated traumatic soft tissue wounds. The review utilised a systematic search of key databases. Three controlled trials were found which studied 1281 people. One further study reported outcomes but could not be fully examined as only an abstract was available. Based on the studies reviewed, results suggest no clinically significant increase in the risk of wound infection in wounds irrigated with tap water when compared to sterile normal saline in uncomplicated soft tissue injury. However, the available evidence lacks strength because of the relatively low power and poor quality of studies.

This research is an evidence based practice information sheet for health professionals and was carried out by the New South Wales Centre for evidence based nursing and midwifery at the Joanna Briggs Institute (2004).

Ten random controlled trials were carried out on 483 patients with acute surgical wounds. The trial studied those who were allowed to bathe or shower prior to a dressing change and those who were not. This study showed no significant difference in the incidence of wound infection. The study supported the use of tap water for wound cleansing provided it was of good quality and suitable for drinking.

This research was conducted by Beam, JW (2006) for the Journal of Athletic Training. There were nine randomized studies comparing wound infection rates among patients with any type of wound cleansed with tap, cooled, boiled or distilled water; normal sterile saline; or any other specific wound cleansing solution. The age ranges were between 2 and 95. 8 of the studies were in hospital emergency departments and 1 in a community setting. The overall findings show no significant differences in infection rates among patients who showered/bathed with or without shower gel and tap water compared with no cleansing or irrigated wounds with distilled water or cooled boiled water compared with cleansing/irrigation with normal sterile saline, procaine spirit or isotonic saline. This analysis also suggested that patients felt better when allowed to shower their wounds and preferred showering to irrigating their wounds from a bottle.

However, the majority of the studies meeting inclusion requirements were subject to selection bias and it was concluded by the author that additional randomised controlled trials are needed to determine the effectiveness of tap water used for wound cleansing among various populations and settings.

I concluded a systematic review of the literature and it would appear from the evidence obtained that whilst most of the researchers feel that tap water is an effective wound cleanser, they all adopted the same opinion, it depends entirely on the quality of the tap water used and would need to be both of good quality and suitable for drinking.

All the authors agreed that more randomised controlled trials need to be undertaken to establish if tap water is an effective wound cleanser. The evidence shows that in the trials undertaken, there was no significant difference in the infection rate of wounds cleansed with normal saline, or tap water.

Nutrition is a fundamental part of wound management as stated by Williams and Leaper (2000) and practitioners need to be more knowledgeable about the role of nutrition in promoting wound healing.  Recommendations to patients with wounds should be to consume a healthy balanced diet, with sufficient quantities of energy and protein foods. All patients with wounds should have appropriate nutritional assessment through the nursing team. The studies also showed that patients felt a sense of well being when allowed to bathe or shower prior to their dressings being changed. Furthermore it must be stressed that the patient must be protected against clinical infection at all costs and hand washing, not wound cleansing, is the single most important part of that prevention.

It is apparent that tap water is both accessible and cost effective, but through my research it is evident that more research is needed in this area, and within general practice normal saline will continue to be used to cleanse wounds until further evidence has been undertaken. Health professionals, especially community and practice nurses, are ideally situated to undertake such a study.