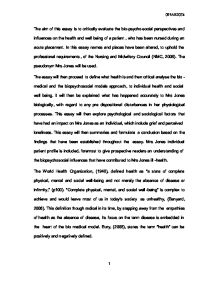 The aim of this essay is to critically evaluate the bio-psycho-social perspectives and influences on the health and well being of a patient, who has been nursed during an acute placement.

The aim of this essay is to critically evaluate the bio-psycho-social perspectives and influences on the health and well being of a patient, who has been nursed during an acute placement. In this essay names and places have been altered, to uphold the professional requirements, of the Nursing and Midwifery Council (NMC, 2008). The pseudonym Mrs Jones will be used. The essay will then proceed to define what health is and then critical analyse the bio-medical and the biopsychosocial models approach, to individual health and social well being. It will then be explained what has happened accurately to Mrs Jones biologically, with regard to any pre dispositional disturbances in her physiological processes. This essay will then explore psychological and sociological factors that have had an impact on Mrs Jones as an Individual, which include grief and perceived loneliness. This essay will then summaries and formulate a conclusion based on the findings that have been established throughout the essay. Mrs Jones individual patient profile is included, foremost to give prospective readers an understanding of the biopsychosocial influences that have contributed to Mrs Jones ill-health. The World Health Organization, (1948), defined health as "a state of complete physical, mental and social well-being and not merely the absence of disease or infirmity," (p100). "Complete physical, mental, and social well-being" is complex to achieve and would leave most of us in today's society as unhealthy, (Banyard, 2006). This definition though radical in its time, by stepping away from the empathies of health as the absence of disease, Its focus on the term disease is embedded in the heart of the bio medical model. Bury, (2005), states the term "health" can be positively and negatively defined. Jadad and O` Grady, (2008), proposed a more positive definition of health as "the ability to adapt and self manage in the face of social, physical, and emotional challenges".(p2). These two definitions conversely give an understanding of what health is, however the Jadad and O' Grady (2008) ...read more.

Whiteing, (2008), states these fractures come adrift if internal fixation is not achieved. The central cartilage of the external callus is replaced by spongy bone due to Osteoblasts activity, when this adaptation is finalised both the internal and external callus form an extensive buttress, at the site of the fracture uniting the struts of spongy bone and the fracture shaft ends (Martini and Nath, 2008). The adjacent area is progressively reshaped as the bone fragments' that are now held securely in situate are able to withstand normal every day stresses. The remodelling of bone due to Osteoblasts and Osteoclasts activity continue for a time period of months to years (Kalfas, 2001). Complete Remodelling is finalised when bone callus has disappeared and only living bone which is compact remains. The complete healing of a fracture restores bone to its unique and mechanical pre fracture state. (Kalfas, 2001: Martini and Nath, 2008: Marieb, 2009). The remodelling of a fracture may take long time in a patient such as Mrs Jones due to her age and smoking (Whiteing, 2008). Smoking cigarettes has detrimental effects on the body, contributing to chronic illness such as lung cancer, chronic obstructive pulmonary disease, (COPD), and coronary artery disease (Warner, 2005). Cigarettes contain over 3000 injurious chemicals ranging from; arsenic, cadmium found in batteries, carbon monoxide (CO), nitrosamines (group of DNA damaging chemicals) and nicotine the additive component in cigarettes (Warner, 2005; Al- Mukhtar, 2010). Studies have shown that bone healing is delayed and complications arise in fracture sites, in individuals who smoke (Adams et al, 2001; Moller et al, 2002; W-Dahl and Toksvig-Larsen, 2004). There is considerable debate within the literature if nicotine directly affects metabolic bone activity, thus delaying fracture healing or is it due to the chemical components within cigarettes (Hollinger and Schmitt, 1999; W-Dahl and Toksvig-Larsen 2004; Warner, 2005). Hollinger and Schmitt, (1999), believed nicotine suppressed bone cell metabolic activity, thus delaying fracture healing. ...read more.

Individuals such as Mrs Jones that have experienced and are experiencing loneliness have more problems sleeping. (Cacioppo and Patrick, 2008). Sleep deprivation is acknowledged to have the equivalent effects on hormonal and metabolic regulation as ageing (Cacioppo and Patrick, 2008; Pettigrew and Roberts, 2006). The British Columbia Ministry of Health, (2004), state social participation and integration of older adults are positive indicators of productive and healthy aging. It is widely cited throughout literature that social support has a strong positive effect on individual health (Umberson and Montez, 2010). It could be argued that it is therefore of even greater importance that Mrs Jones social connectedness be maintained when she returned home since the death of her husband and Millie (BMCH, 2004). To conclude the biopsychosocial model of health and illness was used to explore Mrs Jones perception of her overall health and social well being. The bio medical model and the biopsychosocial model of health and illness were analysed to give the reader a better understanding, of how the biological, psychological, and social factors combined have influenced, Mrs Jones overall health. Mrs Jones had suffered a fractured neck of femur; it was imperative to explore mortally rates associated with this type of fracture in women her age and examine other factors that could have contributed to her fracture. The psychosocial factors were then explored in regard to Mrs Jones overall health. Mrs Jones had recently lost her husband and her only comfort was her beloved dog Millie, who was put down due to ill health. Mrs Jones was grieving the loss of Millie. Mrs Jones grief led her to feel very lonely and she perceived that she would be very lonely when she returned home.The biopsychosocial model of health and illness has proven to be a very productive nursing a patient such as Mrs Jones. This model has an important place in nursing practice as it helps nurses develop their skills and knowledge to nurse a patient holistically, despite literature arguing that models in nursing practice are not always helpful. ...read more.