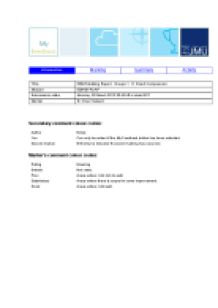 The aim of this experiment was to formulate and manufactured Aspirin 75mg tablets in direct compressions.

﻿spacer 11 13 *1*2*3*3*3*3*4*5*5*5*5*6*7 False True 0000 2819 Introduction Marking Summary Activity Title 5004Tableting Report Groups 1 6 Direct Compression Module 5004DFACAP Submission date Monday, 26 March 2012 20:40:45 o'clock BST Marker Dr Imran Saleem Secondary comment colour codes: Author Notes You Can only be added if the My Feedback button has been activated.[a] Second marker Will only be included if second marking has occurred.[b] Marker's comment colour codes: Rating Meaning Default Not rated.[c] Poor Areas where I did not do well.[d] Satisfactory Areas where there is scope for some improvement.[e] Good Areas where I did well.[f] ________________ Liverpool John Moores University School of Pharmacy and Biomolecular Sciences 5004DFACAP PHARMACEUTICAL FORMULATION Mona Ibrahim Tablets Formulation, Manufacturing & Testing TABLETING Introduction[g] The compressed tablet is by far the most popular and versatile dosage form however it does have its drawbacks, in that it is the most technically difficult to form. Tablets are made by a process of compression. A variety of tablets exist and the type of excipients and the way in which they are incorporated vary between dependent on type and size. The powder formulation is contained within a set volume and force is applied via punches to form a solid compact. The first attribute of a tablet formulation is therefore compressibility. ...read more.

The tooling was used 10 mm concave punch and die set. The lubricant used had been saved from our last experiment. Prior to compression, tablet formulation requires lubrication. In order to ensure that the formation and ejection can occur with low friction. The required amount of lubricant was added and was blended for 5 min. The tablet machine was set up with the compression tooling which were the upper punch, lower punch and dies and this was to familiarise how the operation work and the ways in which the tablet weight and how compression force were controlled. The fill depth of the die was adjusted by altering the capacity regulating screw so that the tablet weight is approximately 300 mg. Target tablet weight is 300mg (± 15mg). A tablet was then compressed by manually turning the fly-wheel. The tablet machine was turned on in order to compress 40 tablets at two different compaction forces, 5KN and 10KN (low and high), they were then stored for the next practical Tablet Testing. The amount of powder (300mg) filled into the die is controlled by the position of the lower punch. The upper punch descends and exerts compression force of 10Kilo Newton. After ejection, the tablet is pushed down to a basket by the hopper shoe. ...read more.

range which was the fastest and simple method to carry out. In addition, the bigger the compression force, the stronger the tablets, the less friable it becomes and the longer it takes to takes for the tablet to disintegrate as it illustrate within the results for 5KN and 10 KN. Each method has advantages and disadvantages; wet granulation is often the most popular but also the most problematic due to the introduction of the wet binder (i.e. water). Direct Compression is the simplest technique and can reduce the cost, however not all drugs (particularly high dose drugs) can be tableted by this method. Alternative methods, such as dry granulation and hot-melt granulation are also available, but require additional specialist equipment and are less frequently employed within the pharmaceutical industry. However, despite the simplicity of the direct compression process, the pharmaceutical industry still produces most tablets by wet granulation methods. Reference[s] 1. Michael E.Aulton; pharmaceutics: The Design and Manufacture of Medicines 3rd edition, Churchill Livingstone Elsevier 1. Tablet testing page 461-466 2. Tablet excipient page 449-454 3. Tablet manufacturing page 443-449 1. Jack Zheng; Formulation and Analytical Development for Low-Dose Oral Drug Products, John Wiley and Sons 2009 1. Wet Granulation page 111 2. Direct Compression page 159 End[t] ________________ Introduction Marking Summary Activity Comments on your work appear in the right-hand margin and may not be visible on some devices. ...read more.