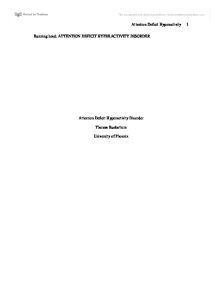 The aspect of the Lifespan Development I would like to discuss is Attention deficit hyperactivity disorder (ADHD), and how it affects our children. I will also discuss the pros and cons of the medical treatment of ADHD, and how ADHD affects children at sc

Running head: ATTENTION DEFICIT HYPERACTIVITY DISORDER Attention Deficit Hyperactivity Disorder Theresa Ruebottom University of Phoenix The aspect of the Lifespan Development I would like to discuss is Attention deficit hyperactivity disorder (ADHD), and how it affects our children. I will also discuss the pros and cons of the medical treatment of ADHD, and how ADHD affects children at school versus home. Through the research of disabilities, we have learned that children have various disabilities such as speech or language impairments, mental retardation, and serious emotional disturbance. One learning disability is attention deficit hyperactivity disorder, which is commonly known as ADHD. The symptoms of ADHD consist of inattention, hyperactivity, and impulsivity. Children who have ADHD have a hard time following instructions and they are easily distracted. Children who are inattentive have difficulty focusing on any one thing and may get bored with a task after only a few minutes. Children who are hyperactive show high levels of physical activity, almost always seeming to be in motion. ...read more.

Even though causes of ADHD have not been found, it has been proposed that low levels of neurotransmitters, prenatal and postnatal abnormalities, and even environmental toxins are involved. Heredity may play a role in ADHD such as a parent or sibling who has ADHD. "About 85 to 90 percent of children with ADHD are taking stimulant medication such as Ritalin or Adderall to control their behavior. The drugs Ritalin and Adderall are stimulants but to some children who have ADHD the medications speed up the underactive areas that controls attention, impulsivity, and planning. Whereas with some children with ADHD it does the opposite, it slows down their nervous system and behavior" (Santrock, 2007). "Stimulant drugs not only reduce disruptive, hyperactive behavior but also improve attention spans of ADHD children. Stimulant drugs are even being used with preschoolers as young as 3 to 5 years of age. Although use of stimulants is not without critics, these drugs can help many children with ADHD calm down and concentrate better on tasks and schoolwork. ...read more.

For educational issues, "in 1990, Public Law 94-142 was recast as the Individuals with Disabilities Education Act (IDEA). IDEA was amended in 1997 and then reauthorized in 2004 and renamed the Individuals with Disabilities Education Improvement Act. IDEA spells out broad mandates for services to all children with disabilities. A major aspect of the 2004 reauthorization of IDEA involved aligning it with the government's No Child Left Behind (NCLB) legislation that was designed to improve the educational achievement of all students, including those with disabilities. An individualized education plan (IEP) is a written statement that spells out a program that is for the student with a disability" ( Santrock, 2002). However, we sell students with disabilities short when we pretend that they are not different from typical students. We make the same error when we pretend that they must not be expected to put forth extra effort if they are to learn to do some things- or learn to do something in a different way. Like general education, an important aspect of special education should be to challenge students with disabilities "to become all they can be" (Santrock, 2002). ...read more.