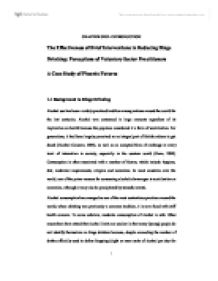 The Effectiveness of Brief Interventions in Reducing Binge

CHAPTER ONE: INTRODUCTION The Effectiveness of Brief Interventions in Reducing Binge Drinking: Perceptions of Voluntary Sector Practitioners A Case Study of Phoenix Futures 1.1 Background to Binge Drinking Alcohol use has been a widely practiced tradition among nations around the world for the last centuries. Alcohol was consumed in large amounts regardless of its implication on health because the populace considered it a form of socialisation. For generations, it had been largely perceived as an integral part of British culture to get drunk (Alcohol Concern, 2003), as well as an accepted form of exchange at every level of interaction in society, especially in the western world (Dean, 1990). Consumption is often associated with a number of factors, which include: hygiene, diet, medicinal requirements, religion and recreation. In most countries over the world, one of the prime reasons for consuming alcoholic beverages is socialisation or recreation, although it may also be precipitated by stressful events. Alcohol consumption has emerged as one of the most contentious practices around the world; where drinking was previously a common tradition, it is now faced with stiff health concern. To some scholars, moderate consumption of alcohol is safe. Other researchers have stated that alcohol limits are unclear in that many (young) people do not identify themselves as binge drinkers because, despite exceeding the number of drinks officially used to define bingeing (eight or more units of alcohol per day for men, and six or more for women) they drink at a slow enough pace to avoid getting seriously drunk. Determining the point to which alcohol consumption can be deemed excessive has proved a challenge. Safe levels of alcohol consumption during pregnancy for instance are not known, therefore, pregnant women are advised to abstain from drinking alcohol. Due to such challenges, several scholars have attempted to define the term 'binge drinking' in different ways. Initially, the term `binge' was used in its clinical sense to imply a periodic bout of continual drinking, perhaps over a period of days, by someone who was alcohol dependent, and ending only when the drinker was unable to continue. ...read more.

Visits were made to Phoenix Futures, a leading provider of services for people with drug and alcohol problems working in conjunction with Bromley Community alcohol service in south east London. Also, under Phoenix Futures, the London Probation Alcohol Services (LPAS) working in partnership with Probation at the Probation Offices providing brief alcohol intervention services to people who are on Probation across 16 London Boroughs; Hampshire Alcohol Brief Interventions Service and the Alpha House residential rehabilitation service both in Hampshire were involved. Phoenix Futures was considered because it is a non-profit making organisation that works in partnership and collaboration with other local treatment providers and agencies in an integrated approach to provide a range of services that can be accessed flexibly in England and Scotland. Semi-structured interviews were administered to the staff from Phoenix Futures in order to explore in depth their attitudes towards binge drinking and the use of brief interventions in combating the problem of binge drinking. Nichmias and Nachmias (1996) contend that a study conducted among a sample of the entire population might bring forth a good result in comparison to the study conducted within a population. Therefore, the sample for this study comprised different categories of practitioners covering the counsellors, the Community Workers, Rehabilitation Workers and nurses. The sampling procedure included: One Community Worker selected from Hampshire Alcohol Brief Intervention Service; one counsellor and two nurses from Bromley Community Alcohol Service; two residential workers and one counsellor sampled from Alpha House Residential Rehabilitation Service; and one Community Worker from London Probation Alcohol Service (LPAS). Therefore, a total of 8 participants were interviewed individually for confidentiality and anonymity purposes, each taking approximately 30 to 45 minutes. Respondents were interviewed separately over five days and the discussion section of this report offers interpretations that are consistent with the results from these interviews. 3.3 Ethical Issues Arising from the Research There are certain practical issues that cause considerable hindrance in the research work which has to be carefully addressed to avoid the delays in research work. ...read more.

There have been serious concerns raised by the RCP and BMA regarding the binge drinking issue. Serious health and ethical issues are related to binge drinking and therefore, health organizations and practitioners demand for absolute ban on alcohol related advertisements in every medium of communication. Conclusion The study constitutes that prime reasons for adopting binge drinking are diversified and may vary from an individual to another. Moreover, the research findings supports the concept that healthcare practitioners are required to develop a sense of awareness among the people specifically focussing on educating the younger generation by providing them the best possible alternatives and guidelines to control this unsafe habitude. The study also suggests that several alcohol related guidelines offered by Royal College of Physicians and British Medical Association are practicable which has to be strictly followed and entrenched in the societal framework of UK and other western countries where binge drinking has is increasingly becoming a fashion. In order to enhance the quality and accessibility of health and social care, integrated evidence based guidelines are imperative to reduce harmful drinking behaviours. Health care providers need improved training and support programs and government must ensure adequate resources for the identification of alcohol-related issues and introduce effective interventions to lessen binge drinking patterns. The overall research findings suggests that alcohol related issues can be minimized when community strategies, licensing regulations, urban planning, transport policies and the alcohol industry would work together to eradicate the harmful effects of alcohol intoxication. The study has successfully presented the views and comments of the practitioners of Phoenix Features by encompassing a range of issues associated with binge drinking in England. It has been identified that the government of UK has introduced and developed standard drink measures and strategic plans for people to monitor their alcohol consumption. Certain social, economical and psychological factors those are responsible for the young adults to espouse bingeing are also be proactively addressed by the government. Furthermore, Phoenix Features is also actively involved to contribute by all means in the noble cause of mitigating binge drinking health and social hazards. ...read more.