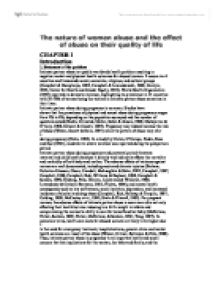 The nature of women abuse and the effect of abuse on their quality of life CHAPTER 1 Introduction 1. Statement of the problem Intimate partner abuse is a public worldwide health problem resulting in negative mental and physical health outcomes for abused women. It occurs in all countries and transcends social, economic, religious, and cultural groups (Campbell & Humphreys, 1993; Campbell & Lewandowski, 1999, Carolyn, 2002; Center for Health and Gender Equity, 2002). World Health Organization (1997) reported on domestic violence, highlighting its prevalence in 24 countries with 20-50% of women being the victims in intimate partner abuse sometime in their lives. Intimate partner abuse during pregnancy is common. Studies have shown that the prevalence of physical and s****l abuse during pregnancy ranges from 3% to 8%, depending on the population surveyed and the number of questions asked (Hedin, Grimstad, Moller, Schei & Janson, 1999; Muhajarine & D'Arcy, 1999; Stewart & Cecutti, 1993). Pregnancy may indeed increase the risk of abuse (Wester, Sweett & Stolz, 1994) while the pattern of abuse may alter 2 during pregnancy (Bohn, 1990). In a study by Gielen, O'Campo, Faden, Kass and Xue (1994), moderate to severe violence was reported during the postpartum period. Intimate partner abuse during pregnancy and postnatal period threatens maternal and child health because it directly and indirectly affects the mortality and morbidity of both baby and mother. The adverse effects of violence against women are well documented, including acute and chronic injuries (Brokaw, Fullerton-Gleason, Olson, Crandall, McLaughlin & Sklar, 2002; Campbell, 1997; Campbell, 1999; Campbell, Kub, Williams & Raphael, 1998; Campbell & Soeken, 1999; Ellsberg, Pena, Herrera, Liljestrand & Winkvist, 1999; Levendosky & Graham-Bermann, 2001; Plichta, 1996); and mental health consequence such as low self-esteem, social isolation, depression, and increased incidence of alcohol and drug abuse (Campbell, Kub, Belknap & Templin, 1997; Golding, 1999; McCauley et al., 1995; Stark & Flitcraft, 1995). For pregnant women, the adverse effects of intimate partner abuse is even more dire not only affecting their health but also ...read more.

refers to the act of physical violence against an intimate partner as a means of resolving conflicts. The physical subscale is further divided into minor and severe violence. Items of minor violence (Appendix A, items k, l, m) include: threw something at; pushed, grabbed, or shoved; and slapped or spanked the intimate partner. Items of severe physical violence (Appendix A, items n, o, p, q, r, s) include: kicked, bit, or hit with a fist; hit or tried to hit with an object; beat up; threatened with a weapon/knife/chopper; and used with a weapon/knife/chopper. The woman was asked to indicate the number of times each action occurred during the past twelve months, ranging from "Never" to "More than 20 times". An extra item was added to the CTS, asking the woman to indicate if she had been subjected to any s****l abuse and the frequency of it should it occur. Finally, an additional section was added to find out the severity of the injury, which ranged from minor, moderate, severe physical hurt to permanent physical damage. The reliability of CTS, as indicated by the internal consistency, ranges from 0.50 to 0.88 for the three subscales. The reliability coefficient is higher for the verbal aggression and violence scales but lower for the reasoning scale 38 (Straus, 1979). Although research evidence indicates high reliability and validity of the CTS (Straus, 1990), limitations are acknowledged including the ignoring of the context of the violence and the extent of the injury and the likelihood of social desirability bias (Straus, 1990). The Chinese translation of the CTS, as used in this study, shows satisfactory reliability, which ranges from 0.76 to 0.86 (Tang, 1994). The SF-36 is a 36-item Short Form Health Survey developed by Ware, Snow and Kosinski (1993) to measure health related quality of life. The SF-36 consists of eight multi-item scales: ten items on physical functioning, four items on role limitation due to physical problems, two items on bodily pain, five items on general health, four items ...read more.

A study was taken in the Accident and Emergency Department in one of the Hong Kong Hospital Authority Hospitals and reported that nurses are not well prepared to encounter intimate partner abuse (Chung, Wong & Yiu, 1996). Recently, Hong Kong Harmony House (Non Government Office) has offered training for policeman for handling abused women (Harmony House, 2001). However, there is still no proper training for nurses in hospitals to counter intimate partner abuse. 81 4.2.3 Proper screening and intervention Adopting a cultural specific and sensitive screening method to screen any abuse is needed for the abused women to obtain proper assistance and advice without blame and shame. Holistic intervention will facilitate the process. Thus, setting up intervention and protocol for offering help and a referral service for these abused women is warranted. For this group of abused women in this study, counseling, follow up or referral service are also recommended to assess their progress and to offer proactive intervention before their problems become serious. 4.2.4 Public education A multi-disciplinary approach is recommended to help to prevent and control intimate partner abuse. It can be done by proactive public health education by mass media to increase public concern. Perhaps education of children during their formative years to shape the social norm of gender equality would be an advantage in counteracting future abuse. 5. Conclusion Because this was a pilot study, it therefore cannot be generalized to fit the overall population. It reveals the critical need for additional research using large 82 randomized samples of victims and abusers. It also provides some hints that the major focus of the incidence of abuse amongst Hong Kong Chinese people is verbal abuse. It also provides some hints of the poorer quality of life of this population. It serves to infuse some insight into the health problem issue faced by these abused women. Finally, the results of this study highlight the fact that health care professionals may be overlooking a life-threatening problem by not screening pregnant women for intimate partner abuse. ...read more.