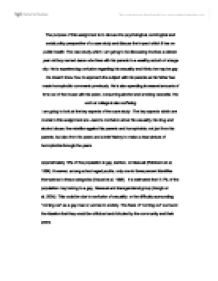 The purpose of this assignment is to discuss the psychological, sociological and social policy perspective of a case study and discuss the impact which it has on public health. The key aspects which are crucial to this assignment are Jasons confusion a

The purpose of this assignment is to discuss the psychological, sociological and social policy perspective of a case study and discuss the impact which it has on public health. The case study which I am going to be discussing involves a sixteen year old boy named Jason who lives with his parents in a wealthy suburb of a large city. He is experiencing confusion regarding his sexuality and thinks he may be gay. He doesn't know how to approach the subject with his parents as his father has made homophobic comments previously. He is also spending increased amounts of time out of the house with his peers, consuming alcohol and smoking cannabis. His work at college is also suffering. I am going to look at the key aspects of the case study. The key aspects which are crucial to this assignment are Jason's confusion about his sexuality, his drug and alcohol abuse, the rebellion against his parents and homophobia, not just from his parents, but also from his peers and a brief history to make a clear picture of homophobia through the years. Approximately 10% of the population is gay, lesbian, or bisexual (Robinson et al, 1994). However, among school-aged youths, only one to three percent identifies themselves in these categories (Kessel et al, 1998). It is estimated that 5-7% of the population may belong to a gay, bisexual and transgendered group (Keogh et al, 2004). ...read more.

This theory still stands today, as many people still believe that many gay people in society carry the AIDS and HIV virus. This repulses many heterosexual people, and leaves them susceptible to bullying and harassment of gay people. This rejection or suspected rejection can have huge ramifications on a homosexual person's mental health. Rejection is usually noted to be because people do not have enough education about homosexuality, and feel that heterosexuals and homosexuals should not work with each other through teens or throughout adulthood. Lack of support and proper discussion surrounding homosexuality is a leading cause of homophobia, and it is usually fear which makes people comment negatively. White and Cash (2003) state that men in general are regarded as problematic because they are less inclined to consult health professionals than women. It has been reported that GLB youth are 2-3 times more prone to attempt suicide than their heterosexual counterparts and as many as 20% to 35% of gay youth have contemplated suicide. Thirty percent of completed suicides are gay or lesbian youth (Gibson et al 1986) This is also the time in which teenagers tend to experiment with their sexuality. This could lead to promiscuity, which can have devastating effects on a person's sexual and physical health if not practiced safely. An example of such effects are, such as, Chlamydia. ...read more.

It appears that times have moved on favourably for homosexuality, although it is still viewed as a taboo subject for peers and parents who are still ignorant to the subject. Jobs such as Nursing, are still considered to be a female job, even though the Nursing profession is gaining more and more male staff each year. Doctors are also regarded as a male job, but female doctors are also on the rise. Gender roles exist within society, this will probably never change. We are not likely to ever change this. More education regarding homosexuality and gender roles would be beneficial for children within schools. Support from people with a mental health background would become useful, as it also seems that the gay community suffer with their mental health. Health professionals trained in sexual health could make any services which are already implemented, more widely known and accessible, and maybe set-up drop-in clinics to discuss situations, in areas which people may feel safe to go to. Possible help could come from previously "outed" men or women to come into classrooms, or support groups to talk about their experiences as a gay member of the community and their difficulties and obstacles which they may have had to overcome. It seems support like this can spur homosexual people on to gain the strength to also "come out" and form their sexual and personal identity with the world and live as an accepted member of not just the gay community, but the community as a whole. ...read more.