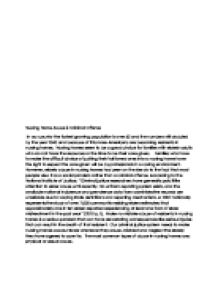 The purpose of this paper is to explore the problem of elderly abuse in nursing homes by first looking at how they operate, then by defining the most common types of abuse

Nursing Home Abuse is Criminal Offense In our country the fastest growing population is over 65 and the numbers will doubled by the year 2040 and because of this more Americans are becoming residents in nursing homes. Nursing homes seem to be a good choice for families with elderly adults who do not have the resources or the time to be their care givers. Families who have to make the difficult choice of putting their frail loved ones into a nursing home have the right to expect the care given will be by professionals in a caring environment. However, elderly abuse in nursing homes has been on the rise do to the fact that most people view it as a social problem rather than a criminal offense. According to the National Institute of Justice, "Criminal justice researchers have generally paid little attention to elder abuse until recently. No uniform reporting system exists, and the available national incidence and prevalence data from administrative records are unreliable due to varying State definitions and reporting mechanisms. A 2007 nationally representative study of over 7,000 community residing elders estimated that approximately one in ten elders reported experiencing at least one form of elder mistreatment in the past year" (2010 p.1). Make no mistake abuse of residents in nursing homes is a serious problem that can have devastating consequences like serious injuries that can result in the death of that resident. Our criminal justice system needs to make nursing homes accountable whenever they abuse, mistreat and neglect the elderly they have agreed to care for. The most common types of abuse in nursing homes are; physical or sexual abuse, The purpose of this paper is to explore the problem of elderly abuse in nursing homes by first looking at how they operate, then by defining the most common types of abuse prevalent in the nursing home environment and showing examples of each type of abuse. ...read more.

Reason being, diseases and changes of normal aging can mimic the signs of abuse. For example, older people are frail with very thin skin, this causes bruising with only the slightest trauma. Just a slight bang of the hand against a nightstand can cause severe bruising. Someone unfamiliar with this fact might come to the incorrect conclusion that the bruise was from an aggressive staff member of the facility. Also, many nursing home residents are unable to communicate what happened to them because of their mental state and most of the time no one else is around to witness the abuse. There is also a problem with the nursing homes themselves in the way they handle reports of abuse. In a study by the U.S. Government Accounting Office on nursing home abuse, it found that the incident reports for abuse in these facilities fit into three categories; unreported, delayed and unpunished (2002). Unreported Incidents Residents and family members sometimes don't report abuse because they fear there will be some sort of retribution like more abuse or being thrown out of the facility with nowhere to go. Employees don't report abuse because they fear for their jobs, fear of harassment from coworkers and management, and are skeptical the abuse occurred when reported to them by a resident (GAO,2002). Delayed Incident Reports Most of the time when abuse occurs and the resident or employee do report it to the appropriate staff member that person delays reporting the incident to the proper authority. Sometimes the state survey agency does not get the abuse incident report until weeks after the incident has occurred. Reason being, the nursing home management does not want to risk getting bad publicity or sanctioned by the state for the abuse (GAO, 2002). Unpunished Incidents Sometimes residents who are abused do not want to testify in court or are mentally unable to do so. ...read more.

It is also true that with age, comes health problems such as arthritis, diabetes, dementia, heart disease, and cancer. The older you become, the more your health deteriorates. In the year 2030, the last of the boomers will be 65, but the first wave of boomers will be between the ages of 74 to 84. This will place a huge burden on our existing healthcare system. In an article written by, Mary Tinetti & Leo Cooney they state, "that twenty-one million of those Americans will need care from a geriatrician for multiple, complex health problems. Given current recruitment and training trends, the center estimates that the demand for geriatricians and other geriatrics health care professionals will far exceed the supply" (2009 p.1). The biggest reason for these shortages is that in the pecking order of medical specialties, geriatric medicine may not be the most glamorous or lucrative. Caring for older people, because of their declining health with death being the long-term outcome of their care is not a very reinforcing profession. Other reasons are the current Medicare and Medicaid Systems. There is just an excessive amount of paperwork involved in claiming for reimbursement of medical services and the reimbursements are less than any other specialty (Tinetti, Cooney 2009). We can solve this problem by simply paying more for the services of geriatric specialists and direct-care workers. Higher salaries would attract more health professionals to geriatric careers and would stop the continual turnover of elderly care aides, many of whom earn wages below the poverty level. Once again, the American socio-cultural landscape is about to change. So unfathomable is this demographic revolution that every aspect of society will be affected. The different generations who are alive today, are among the first in history to be raised with the expectation of old age. The baby boomers are the forerunners of a prolonged existence, that will be felt for generations to come. Baby boomers once again, are the pioneers of a new life course, and meeting their needs will also establish your own passage through time. ...read more.