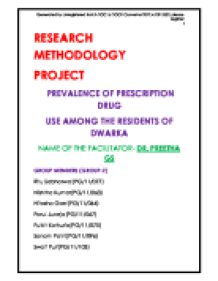 RESEARCH METHODOLOGY PROJECT PREVALENCE OF PRESCRIPTION DRUG USE AMONG THE RESIDENTS OF DWARKA NAME OF THE FACILITATOR- DR. PREETHA GS GROUP MEMBERS (GROUP-2) Ritu Sabharwal(PG/11/077) Nishtha Kumar(PG/11/063) Nitasha Goel(PG/11/064) Parul Juneja(PG/11/067) Pulkit Kathuria(PG/11/075) Sonam Patni(PG/11/096) Swati Puri(PG/11/103) Umesh Jadhav(PG/11/109) INTERNATIONAL INSTITUTE OF HEALTH MANAGEMENT RESEARCH DWARKA, NEW DELHI EXECUTIVE SUMMARY The study entitled "Prevalence of Prescription Drug use" is the intentional use of medication without prescription i.e in a way other than as prescribed or experience or feeling it causes. Factors responsible for Prescription drug use are lack of knowledge, careless attitude misperceptions about the safety, varied motivation, just to get a feeling of high, relationship difficulties, problems on the job and sedentary lifestyle. Abuse of prescription drugs can produce serious health effects, including addiction.The use of drug without prescription is growing rapidly in India( 4.7 million as per the National Survey conducted in India in 2005) The purpose of this study was to determine the prevalence of Prescription drug use and to assess patients' perceived safety of these medications among citizens of Dwarka. The prevalence of over the counter drugs and other prescription drugs use was estimated and found substantial use of prescription drug abuse in our study. The main objective is to evaluate the different patterns of prescription drug use among residents of Dwarka over the last one year and propose recommendations regarding safe usage of drugs and to determine the awareness among people of Dwarka regarding safety drug medication Its a cross sectional descriptive type of study. Study population consisted of residents ,Healthcare providers, chemist of Dwarka region consisting various sectors. Out of which sector for study were randomly selected by simple random sampling and five sector were selected and in these sectors samples were interviewed. Every third household was examined to avoid biasness. Total sample size of 100 households was taken. Data collected with help of Questionnaire and Interview schedule and Technique was closed -ended questions, for interview schedule interview was conducted which was semi structured (open and closed ended questions) ...read more.

The medications most commonly abused are: * Pain relievers - 5.3 million * Tranquilizers - 2.0 million * Stimulants - 1.3 million * Sedatives - 0.4 million Among adolescents, prescription and over-the-counter medications account for most of the frequently abused drugs by high school seniors (excluding tobacco and alcohol).Nearly 1 in 12 high school seniors reported nonmedical use of Vicodin; 1 in 20 reported abuse of OxyContin. When asked how prescription pain relievers were obtained for nonmedical use, 59% of 12th graders said they were given to them by a friend or relative. The number obtaining them over the internet was negligable.Among those who abuse prescription drugs, high rates of other risky behaviors, including abuse of other drugs and alcohol, have also been reported.(3) 3.2 INDIAN STUDY ON PRESCRIPTION DRUG USE J Am Board Fam Med. 2005 Mar-Apr;21(2):175 -Data from the 2005 National Survey on Drug Use and Health demonstrated that 6.4 million (2.6%) people aged12 or older had used prescription drugs for nonmedical reasons during the past month. Of these,4.7 million used pain relievers, 1.8 million used tranquilizers, and 1.1 million used stimulants. The nonmedical use of prescription drugs among young adults aged 18 to 25 increased from 5.4% in 2002 to 6.3% in 2005, primarily because of an increase in the abusive use of pain relievers(4) 4.0 OBJECTIVES-: 4.1 GENERAL OBJECTIVE---- * To evaluate the different patterns of prescription drug among residents of Dwarka over the last one year and propose recommendations regarding safe usage of drugs. 4.2 SPECIFIC OBJECTIVES-- 1. To assess the different patterns of prescription drug use among the residents of Dwarka over a period of one year. 2. To determine the awareness among people of Dwarka regarding safety drug medication. 3. To propose recommendations for awareness regarding safe use of drugs. 5.0 METHODOLOGY 5.1 Study Design: Cross-sectional, descriptive study. 5.2 Study Area: Residents of Dwarka 5.3 Study Population-:- 1.The people residing in Dwarka 2.Health care providers of Dwarka 3.Chemists of Dwarka 5.4 Sampling size: 100 5.5 Sampling method: simple random sampling 5.6 TOOL: a. ...read more.

time schedule and unacceptable behavior of doctor people prevent going to doctors.They said that they were very well aware of the DRUGS AND COSMETICS ACT,1940 but the competition is so much that if one doesn't gives it the other chemist would give the drug and a chemist can only earn by selling his medicines so they give drugs without prescription on the demand of customers. LIMITATIONS There are a number of limitations that flow from the sample size and research design. 1. The population interviewed consisted of a sample of only 100 people and 2 chemists and 2 health providers, some of the patterns identified may have been under or overestimated. 2. The calculations were based on reports provided by the interviewees, some of whom were very conscious during the questionnaires due to which levels of awareness among people could not be properly analyzed and there could be some biasness in the report. 3. It was difficult to convince the hospital authority for conducting the survey of doctors during the hospital hours and once this hurdle was overcome, the doctors in hurry filled the questionnaire, due to which some patterns may be under or over estimated. 4. Due to time constraints we could interview separately only 2 health care providers and 2 chemists due to which again some of the patterns may be under or overestimated. 8.0RECOMMENDATIONS Recommendation suggested are-- 1. Awareness regarding side-effects and dosage of the prescription drug use 2. To educate the people by making advertisement at commercial level by using banners, organizing cultural programmes, entertainment education regarding its ill effect on health. 3. To conduct doctor education program on rational drug prescribing and consumer education on rational drug use 4. We should develop and use a standardized ideal format for all prescriptions 5. Irrational prescribing is a habit that is difficult to cure however prevention is possible by short problem based training programs in pharmacotherapy. 6. The patients should receive evidence based cost effective treatments for their health problems 9. ...read more.