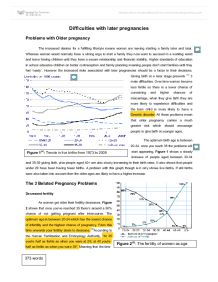 The relation between age and fertility. Over time women become less fertile so there is a lower chance of conceiving and higher chances of miscarriage, when they give birth they are more likely to experience difficulties and the born child is more likely

Difficulties with later pregnancies Problems with Older pregnancy The increased desires for a fulfilling lifestyle means women are leaving starting a family later and later. Whereas woman would normally have a strong urge to start a family they now want to succeed in a working world and leave having children until they have a secure relationship and financial stability. Higher standards of education in school educates children on better contraception and family planning meaning people don't start families until they feel 'ready'. However the increased risks associated with later pregnancies should be a factor in their decisions. Giving birth at a later stage presents (1) 3 main difficulties. Over time women become less fertile so there is a lower chance of conceiving and higher chances of miscarriage, when they give birth they are more likely to experience difficulties and the born child is more likely to have a Genetic disorder. All these problems mean that older pregnancy carries a much greater risk which should encourage people to give birth at younger ages. The optimum birth age is between 20-34, once you reach 35 the problems will start appearing. Figure 1 shows a steady increase of people aged between 30-34 and 35-39 giving birth, plus people aged 40+ are also slowly increasing in their birth rates. It also shows that people under 29 have been having fewer births. A problem with this graph though is it only shows live births. If still births were also taken into account then the older ages are likely to have a higher increase. The 3 Belated Pregnancy Problems Decreased fertility As women get older their fertility decreases. Figure 2 shows that once you've reached 35 there's around a 50% chance of not getting pregnant after intercourse. The optimum age is between 20-24 which has the lowest chance of infertility and the highest chance of pregnancy. From this time onwards your fertility starts to decrease. ...read more.

This is when the baby is in the womb in an erratic position for example bottom or feet first. Alternatively the children may share a placenta meaning that after the first is born by v*****l birth the second may experience oxygen starvation in the womb resulting in the need for emergency caesarean. First time older mothers are likely to have the size of their birth canal reduced due to inactivity. This means that the baby may not be able to fit through the canal. An example of this is when a baby's head is too big to fit through the pelvis. Sometimes an artificial birth is the only safe way to remove the baby to prevent a still birth. After a woman receives one Caesarean section then doctors will assume that any future pregnancies will also show some difficulties. Therefore older mothers who want to have more than one child are likely to experience repeated Caesareans each time, more Caesareans will increase the risk of the area reopening and the women's birth canal will become more inactive. Greater Risk of Genetic Disorders As age increases there is a higher chance of there being mutation in the chromosomes. As older woman generally mate with older men the chance of having a mutated gene strain is greatly increased. The most common of these is Down's syndrome which results in learning difficulties and certain growth problems experienced by the child. (14)It is caused by an extra 21st chromosome, in either the egg or sperm cell, resulting in a Down Syndrome child having 47 chromosomes. (1)Harvard Medical School showed in a study that the chance of having a child with Down Syndrome severely increases with age. They found that, 'At age 25, a pregnant woman has a 1 in 1,250 chance of delivering a Down syndrome baby; at age 30, it's 1 in 952; at age 35, 1 in 385; and at age 40, 1 in 106.' ...read more.

This means that women will be able to find out if their baby has Down syndrome before the 24 week limit of abortion. This means that women may choose to abort the pregnancy and try again for another baby. Of course the subject of abortion raises many quandaries which women will have to decide over as a lot of people do not perceive the disability of a child to be a difficulty. Conclusion As seen, leaving pregnancy until later in life can have detrimental effects on both the mothers and babies health. Yet without changes to how women portray childbirth and how quickly they can get stability in their lifestyle, the age of which women try to conceive will not decrease. Couples will start looking for extreme answers such as surrogacy to have the perfect life they desire and until the stability of jobs and marriage is maintained couples will not feel safe having babies at younger ages. Evaluation of Sources The majority of sources I used were from Medical foundations such as the NHS, these would have good reliability as it is a government funded association and they have to supply decent public information. The whole website is made by experts in each field. Some of the help websites of pregnant people may not be as reliable but show people's experiences so are a good area for possible outcomes to be taken from also due to the fact that pregnancy difficulties is a sensitive subject people are less likely to try to deceive people. As only facts were looked for and not opinion's it is likely that the reliability for these sources is sound as they aim to help people who have experienced the same difficulties as them. Wikipedia can be edited by anyone, so the information may not be as reliable as other sources. For this reason I used the website sparingly and any information I used from it I checked its reliability by comparing it to other sources on the same topic. ...read more.

**** A very good AS level research report, in which key scientific data regarding the problems associated with late child bearing and some of the solutions are clearly presented and referenced. The solutions are less well explored than the problems and the reference list and evaluation lacks detail. To improve:
1)Explain the 'biology' behind the solutions more thoroughly. There is a lot of information and statistics about the problems, but solutions are analysed less thoroughly. For example, how effective is genetic screening etc.
2)Give a reference list that follows standard Harvard format. Instructions should be available online
3)Evaluate references more thoroughly, considering the suggestions given next to the section