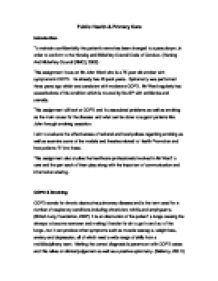 This assignment will look at COPD and its associated problems as well as smoking as the main cause for the disease and what can be done to support patients like John through smoking cessation.

Public Health & Primary Care Introduction To maintain confidentiality the patient's name has been changed to a pseudonym, in order to conform to the Nursing and Midwifery Council Code of Conduct. (Nursing And Midwifery Council [NMC], 2008) This assignment focus on Mr John Ward who is a 75 year old smoker with symptomatic COPD. He already has 45 pack years. Spirometry was performed three years ago which was consistent with moderate COPD. Mr Ward regularly has exacerbations of his condition which is treated by his GP with antibiotics and steroids. This assignment will look at COPD and its associated problems as well as smoking as the main cause for the disease and what can be done to support patients like John through smoking cessation. I aim to evaluate the effectiveness of national and local polices regarding smoking as well as examine some of the models and theories related to Health Promotion and how patients 'fit' into these. This assignment also studies the healthcare professionals involved in Mr Ward's care and the part each of them play along with the important of communication and information sharing. COPD & Smoking COPD stands for chronic obstructive pulmonary disease and is the term used for a number of respiratory conditions including chronic bronchitis and emphysema. (British Lung Foundation, 2007) It is an obstruction of the patient's lungs causing the airways to become narrower and making it harder for air to get in and out of ...read more.

You can also see from the graph that smoking dropped across all the age groups significantly in 2007, this could have been due to the Smoke free legislation being completed in that year. After that the prevalence has remained stable if you look at the data 'All aged 16+' which could suggest that the NHS Stop Smoking Service has had little or no effect on smokers in this country and further intervention is required. Government polices encourage nurses to use every opportunity and every resource available to them to promote a patient's wellbeing and health regardless of the care setting they are in, but health promotion is a process that enables individuals to increase the control over their own health. (Keane & Coverdale, 2011) According to the World Health Organisation: 'Health promotion is the process of enabling people to increase control over, and to improve, their health. It moves beyond a focus on individual behaviour towards a wide range of social and environmental interventions'. (World Health Organisation, 2011) Therefore health promotion is a about getting people to take action, it is not something that can be done on or to people; it is done by, with and for people either on a one to one basis or in groups. There are a number of different approaches to health promotion and according to Naidoo and Wills (2004) ...read more.

Around 10 million adults in Britain smoke cigarettes but recent research suggests that self-reported cigarette smoking rates may underestimate true tobacco smoking prevalence by 2.8% in England. Research has also shown that since 2007, the rate of tobacco smoking has remained stable. (Cancer Research UK, 2011) Does this mean the Government are not doing enough to tackle smoking or does it show that whatever the Government put in place an individual will always exercise their the freedom of choice! Mr Ward has a confirmed diagnosis of COPD and has a number of different healthcare professionals involved in his care therefore good communication is paramount, this is achieved by the use of his patient notes which are kept in his house but I do feel that lack of communication may have contributed to his lack of regular spirometry testing. Spirometry is needed to make a firm diagnosis of asthma and COPD and to distinguish between the two, this is important because treatment of COPD is different from asthma. Together with the presence of symptoms, spirometry helps determine the severity of COPD and can be a guide to specific treatment steps. Therefore is should routinely be preformed once a year. Mr Ward hasn't had a spirometry done for at least three therefore it should be a priority that the test is undertaken as soon as possible. John's COPD was described as moderate three years ago but FEV1 in persons with COPD declines over time therefore it is a possibility that his COPD may well be severe and requires a change in treatment. ...read more.