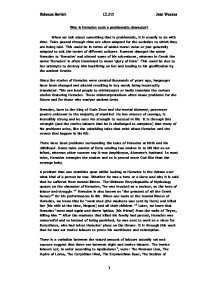 Why is Heracles such a problematic character?

Why is Heracles such a problematic character? When we talk about something that is problematic, it is usually to do with time. Tales passed through time are often adapted for the societies to which they are being told. This could be in terms of added moral value or just generally adapted to suit the tastes of different cultures. Romans changed the name Heracles to 'Hercules' and altered some of his adventures, whereas in Greek the name 'Heracles' is often translated to mean 'glory of Hera'. This could be due to her attempts to destroy him backfiring on her and leading to his glorification by the ancient Greeks. Since the stories of Heracles were created thousands of years ago, languages have been changed and altered resulting in key words being incorrectly translated. This can lead people to misinterpret or badly translate the various stories featuring Heracles. These misinterpretations often cause problems for the future and for those who analyse ancient texts. Heracles, born to the king of Gods Zeus and the mortal Alcmene, possesses powers unknown to the majority of mankind. He has masses of courage, is incredibly strong and he uses his strength to succeed in life. It is through this strength (and the twelve labours that he is challenged to complete) that many of his problems arise, like the coinciding tales that exist about Heracles and the events that happen in his life. ...read more.

The reasons for this are not explained, however there is a general pattern in mythology which appears to go from tasks that are apparently easy (for a man like Heracles) to more challenging tasks, from The Nemean Lion to The Capture of Cerberus, a three-headed beast in the underworld. Each labour has variations in itself which add to the problems when learning about Heracles. To begin with, The Lernean Hydra (the second labour) for example, can have a varying amount of heads. The seventh labour, The Cretan Bull, is also an unclear labour. Some sources say that Heracles merely caught the bull and gave it to Eurystheus, who later let it go. One source contains differing accounts about this labour. One account says that Heracles caught the bull and offered it to Hera, who refused it and another says that Heracles set it free himself6. Although these are only mild variations of the certain tales, they still alter our knowledge of Heracles. They therefore cause doubt in ones mind about which sources are the most reliable. Another labour which is subject to multiple translations is the ninth labour (according to Apollodorus), The Belt of Hippolyte. Apollodorus' version claims that Heracles went to the Amazon queen and asked her for it, although Hera prevented it from being this simple. She disguised herself as an Amazon and wreaked havoc on their homes. ...read more.

The areas surrounding Heracles' death are also relatively fragile. There are different sources that tell us separate things. The death that is the most dominant is the idea that Heracles was given poisoned blood which, when warmed "began to corrode his skin"11 other stories concerning Heracles' death have altered where the poison came from, whether it was the s***n of Nessus or the blood of the Hydra. After his death, it has been said he descended into heaven from a funeral pyre he built himself and afterwards gained immortality. In conclusion, it is not Heracles himself that was a problem, it was the conflicting sources that exist about him. They cause problems because they lead us to believe many different things about Heracles and therefore one finds them to be untrustworthy. It is hard to believe that a man who kills savagely from a young age in fits of temper could be such a heroic icon for the people in Greece. So we are unable to conclude thoroughly on what kind of a man he really is. Heracles is a person of many characteristics, good and bad. They are generally good and he seems to have lived his life as a punishment for all his mistakes. Other unavoidable problems arise through the different translations that are created so that the stories of Heracles and his life can be globally accepted. These variations cause problems because they can make Heracles appear better or worse, depending on the purpose through which the stories are told. ...read more.