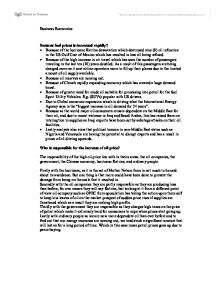 Reasons fuel prices is increased rapidly? * Because of the hurricane Katrina devastation which destroyed nine (9) oil refineries in the US Gulf Cost of Mexico which has resulted in less oil being refined. * Because of the high increase in air travel which has seen the number of passengers traveling in the last ten (10) years doubled. As a result of this passengers are being charged more as it cost airline operators more to fill up their planes due to the limited amount of oil supply available. * Because oil reserves are running out. * Because of China's rapidly expanding economy which has created a huge demand boost. * Because of greater need for crude oil suitable for processing into petrol for the fuel Sport Utility Vehicles. E.g. (SUVs) popular with US drivers. * Due to Global economic expansion which is driving what the International Energy Agency says is the "biggest increase in oil demand for 24 years". * Because as the world major oil consumers remain dependent on the Middle East for their oil, and due to recent violence in Iraq and Saudi Arabia, this has raised fears on interruption to supplies as Iraqi exports have been cut by sabotage attacks on their oil facilities. ...read more.

Thirdly with the government they are responsible as they charges high taxes on the price of petrol which make it extremely hard for consumers to cope when prices start going up. Lastly with ordinary people as we are now more dependent oil than ever before and to find out that our energy recourses are running out, we tend stock a significant amount that will last as for a long period of time. Which in this case mean petrol prices goes up due to panic buying. What is the effect on the following? * Owner of a transport company * Me as an individual * Local shops * Oil Companies * Car drivers * The police * The government The increases of oil prices effect people in a step by step process; this is as each person's effect causes difficulty for the other in order to operate. Firstly with the owner of a transport company the effect high oil prices have on the them will be, their ruing cost will double, and in order to order over come this they will have increase fears which will enable the to break even. ...read more.

they don't run out of petrol, this will result in more customers wanting petrol which will make up long queues and might result in disagreement between customers, but looking at it from a different point of prospective the garage will be making more profit as they will be getting more customers. The police are affected as a result of misunderstanding and protest against the increase in oil prices between customers, mean they are called to slot out the problems and restore order. This makes their job harder as more offices will be needed to work over time which the governments have to pick up the bills. The effect increase in oil prices have on the government is more of an economical crisis as they have to find a way to satisfy every one affected buy the high oil prices with out making any one uncomfortable. This will result in cutting back on spending and to be realistic no sector will accept having to cut back. Also with the government as they charge more taxes on the price of petrol they will see their tax intake in that period may be double. ?? ?? ?? ?? Business Economics ...read more.