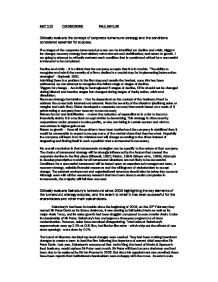 Critically evaluate the concept of corporate turnaround strategy and the conditions considered essential for success.

Five stages of the corporate turnaround process can be identified as: decline and crisis; triggers for change; recovery strategy formulation; retrenchment and stabilisation; and return to growth. I am going to attempt to critically evaluate each condition that is considered critical for a successful turnaround to be completed.

Decline and crisis – It is critical that the company accepts that it is in trouble. “The ability to recognise and admit the severity of a firms decline is a crucial step for implementing intervention strategies” - Gopinath 1991

Admitting there is a problem is the first step and usually the hardest, once this has been addressed, we can attempt to recognise the failure stage or stages of decline.

Triggers for change – According to Castrogiovani 5 stages of decline, CEOs should not be changed during blinded and inactive stages but changed during stages of faulty action, crisis and dissolution.

Recovery strategy formulation – Can be dependant on the context of the business. Need to address the cause both internal and external. Note the severity of the situation (declining sales or margins and cash flow). Slater developed a corporate recovery framework based on a scale of 9 points rating a company from recovery to non recovery

Retrenchment and stabilisation – means the reduction of expenditures in order to become financially stable. It is a tactical concept similar to downsizing. This strategy is often used by corporations under pressure to raise profits, or who are failing in certain sectors and wish to concentrate in higher-gain areas

Return to growth – Once all the problems have been tackled and the company is stabilized then it would be reasonable to expect to recoup some of the market share that they have lost. Hopefully the company will learn from its mistakes and will change according to the times instead of stagnating and finding itself in such a position that a turnaround is necessary.

My overall conclusion is that turnarounds strategies can be specific to the nature of that company. The choice of turnaround strategy will be strongly influenced by the factors that caused the corporate decline in the first place (Bibeault, 1982; Slatter, 1984; Grinyer et al., 1988). Attempts to develop prescriptive models for all turnaround situations are not likely to be successful. Conditions for a successful turnaround will be based upon an experienced management team, a recovery strategy, suitable financial resources and the willingness of stakeholders to accept change. The external environment and organisational structure should also be taken into account. Although even with all the necessary research that has been done to assist companies in turnarounds, the majority still fail than succeed.

Critically evaluate Sainsbury’s turnaround since 2004 highlighting the key elements of the turnaround strategy adopted, and the extent to which it has been successful for the shareholders and other main stakeholders.

Sainsbury’s had been in trouble since the beginning of 2004, on the 10th February they named Sir Peter Davis as its future chairman, it was starting to fall behind Asda as well as its major rivals Tesco, and its sales growth had been sluggish compared to even smaller rivals. Under the leadership of Sir Peter, Sainsbury's has undergone a three-year programme of store modernisation. However, sales have remained disappointing. Total sales at Sainsbury's supermarkets were up 2.2% at £15.3bn, but like-for-like sales - which strip out the effects of new store openings - were down by 0.2%.

The board of directors decided top level changes were needed. They had been making boardroom changes to create a team to lead the firm following the departure of current chief executive Sir Peter Davis. Last year, Sainsbury's announced that Justin King, the head of Marks & Spencer's food business, would replace Sir Peter next month. Sir Peter will then become chairman and had been due to be replaced by Sir Ian Prosser in 2005.But since his appointment was unveiled; there have been reports that institutional shareholders were unhappy with the move.  Investors were said to be unconvinced that he was the best person to help turn round Sainsbury's, which is losing ground to its rivals.

Mr King put simply: it's all the fault of the last lot. Mr King's predecessor, Sir Peter Davis, blew billions on IT systems and automated depots that were too complex and couldn't deliver the goods to the shops. In a damning report on previous management's mistakes, Sainsbury's admits that its "costs today are a greater proportion of sales than they were four years ago". Even more depressing, Sainsbury's product availability levels are currently worse than before Sir Peter embarked on his spending spree. In short, Sir Peter's bold plan to revolutionise Sainsbury's behind-the-scenes operations descended into a comedy of errors. Mr King went on to say “In the last 10-15yrs whilst others have got better we haven’t, so its back to basics, return the focus to food, cut costs, stock the shelves and make sure the customers are happy.”

Mr King had to develop a plan for Sainsbury’s fight back, they included thousands of price cuts so that everyday items are competitive with rivals, King needed people back in the shops to gain a bigger market share and then the customers could see for themselves that they were making a big effort to entice them back.

King brought in Lawrence Christensen, a supply chain expert, to fix problems with warehouses and store systems that had left shelves empty. This was crucial as it addressed the need of the most important stakeholders the customers. Customers were becoming increasingly frustrated with empty shelves and it was driving them into the arms of their direct competitors, which allowed them to drop prices further as they had more customers. Luckily for Mr King their was an extremely loyal consumer goodwill towards Sainsbury’s which crucially allowed him time to make effective changes. In a trading update in March 2006, Sainsbury’s said customer numbers grew by more than one million and it was the companies 5 consecutive quarter of like for like sales growth. It had successfully enticed customers back and existing customers to shop their more.

Kings ‘Try something new today’ slogan was advertising in an attempt to get past the negative image a lot of people had built. He dropped the campaign “good food, costs less” as it was simply not true. He was aware of a new breed of consumers that cared more about just the price and quality of the products and expanded fair trade and organic food ranges. King next slogan was Making Sainsbury’s great again….

The suppliers also felt the effect of Sainsbury’s restructuring, the best example is that of Dungannon Meats, which employs more than 1,000 people, has lost an order to supply 40% of Sainsbury's beef products from next year. The supermarket giant has decided to use a single supplier for its fresh beef products. This new approach to beef supply forms part of Sainsbury's plans to create a long-term, sustainable and reliable supply of beef and maximise economies of scale to provide real and long term benefits to both customers and suppliers. Ian Merton, director of fresh food at Sainsbury's said: "Many of the farmers who supply us are small producers, and it has been a challenge to devise an efficient chain from that small farm to the consumer

The firm has confirmed that for the first time in 25 years, full-time staff will not be getting their festive bonus in 2004, today worth some £100. Instead the supermarket chain's staff will have to make do with a 5% extension in store discount. Sainsbury's is struggling against its rivals, and has seen profits slip. The decision to end the Christmas bonus will affect 100,000 full-time Sainsbury's staff, which is instead having their store discount increased from 10% to 15% from October to December. Sainsbury's said the decision had been made following a successful trial. An extra 5% discount will mean staff will have to spend £2,000 in the run up to Christmas to recoup the £100 taken from them. That's about £200 per week. Shrewd move by Sainsbury’s, make your staff give you a bonus of £1,900. It was part of a cost cutting measure, which proved particular hard to take, Joanne McGuinness the national officer of shopworkers' union Usdaw, said staff would feel understandably angry at the award of big bonuses to directors when many were not getting a pay rise themselves this year. "Our members will look at this as the directors operating a 'one rule for us, another rule for the workers' policy," she said.

We've got to get better at a faster pace than others. We have to win the race by running faster, not by expecting the other guy to trip up, this sort of straight talking from Mr King is what has helped sainsburys recovery.

Consider by way of contrast, the situation of a long established but family-owned bakery operating in the north east of England. This private limited company owns the premises where the food products are produced but only occupies 20 retail outlets located around the region on a short term lease basis. From a financial management viewpoint, highlight the differences in attempting a ‘turnaround’; in the business fortunes of this small business compared to a large scale business such as Sainsbury’s.

A company can be described as ‘small’ under section 248 of the company’s act 1985 if it has less than 50 staff, a turnover of less than 2.8million, and a balance sheet total of not more than 1.4million. Small independent business will have a small market share compared to retailers such as Sainsbury’s; therefore the turnaround process is likely to differ. Unlike large companies they do not have the ability to cut large numbers of employees, tap pension funds and banks for infusions of capital, and sell off enormous assets to raise cash and decrease debt. Although not degrading the accomplishments of these people, few small and midsize companies can make such dramatic changes. Small business can have a difficult time getting a line of credit from a bank. Many small firms will look towards venture capitalist as a way to get an investment boost. In return they will offer the venture capitalist equity in the company in return. As well as finance the expertise they bring are crucial. Their can be several disadvantages as a deal with venture capitalist can be long and complex, they require you to draw up a detailed business plan which will include financial projections which may require expensive professional help. You will also find your self paying for legal and accounting fees even if you are unsuccessful in securing funds.

I stated that an experience business team was needed for a turnaround, in a small business the leader who find themselves in a turnaround situation are initially afraid and likely to question whether they have the skill to fix their company. Unfortunately, those feelings can’t last long or they’ll affect the energy and ability that is needed to turn the ship around. Your employees and family will look up to them for leadership and stability.