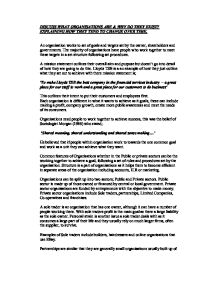 DISCUSS WHAT ORGANISATIONS ARE

DISCUSS WHAT ORGANISATIONS ARE & WHY DO THEY EXIST?

EXPLAINING HOW THEY TEND TO CHANGE OVER TIME.

An organisation works to set of goals and targets set by the owner, shareholders and governments. The majority of organisations have people who work together to meet these targets in a set structure following set procedures.

This outlines their intent to put their customers and employees first.

Each organisation is different in what it wants to achieve as it goals, these can include making a profit, company growth, create more public awareness and meet the needs of its consumers.

Organisations need people to work together to achieve success, this was the belief of Sociologist Morgan (1986) who stated;

He believed that if people within organisation work to towards the one common goal and work as a unit they can achieve what they want.

Common features of Organisations whether in the Public or private sectors can be the working together to achieve a goal, following a set of rules and procedures set by the organisation. Structure is a part of organisations as it helps them to become efficient in separate areas of the organisation including accounts, H.R or marketing.

Organisations can be split up into two sectors; Public and Private sectors. Public sector is made up of those owned or financed by central or local government. Private sector organisations are funded by entrepreneurs with the objective to make money.

A sole trader is an organisation that has one owner, although it can have a number of people working there. With sole traders profit is the main goal as there a large liability as the sole owner. Personal strain is another issue a sole trader deals with as it consumes a large part of their life and they usually rely on much larger firms, often the supplier, to survive.

Examples of Sole traders include builders, hairdressers and online organisations that use EBay.

Partnerships are similar that they are generally small organisations usually built up of 2 to 20 partners and like a Sole trader can find financing hard. Examples of Partnerships include accountants, solicitors and private healthcare organisations.

Limited companies can be either classed as Public Limited Company (PLC) or Private Limited (LTD). The difference between the two is that PLC’s sell their shares on the stock exchange to the public and have to publish their accounts* each year for prospective investors to view.

Private companies are usually the smaller of the two with less shareholders, thus the gap between ownership and control is small.

Limited companies have an edge over smaller organisations as the shareholders can only lose the value of his/her share whereas the financial burden with Sole traders and Partnerships it could lead to them in a position where they could lose all their assets.

Co-operatives are ran and owned by members where control is shared democratically and everyone has a vote.

A franchise involves a business using the name & logo of an existing organisation, the organisation allows the franchisee to use both its products and logo but also sets rules to be followed; this might include where they are based or the product itself. Examples of Franchises are McDonalds, The body Shop and Thornton’s Confectionary.

Public organisations provide a service or product like most private ones but with Public sector organisations they are ran by the government, don’t have a objective of making a profit but provide essential service to the public like healthcare and education. Although they aren’t driven by profit Public organisations generally set themselves financial targets.

It is essential that organisations exist as they can benefit social, political and economic environments. Both public and private sector organisations are important as they can both provide they provide welfare for society and provide jobs and careers along with helping the economy growth.

The business cycle is a process all organisations go through it involves the way in which businesses go through the different situations. It includes the start of how a business begins, organises how its going to run, identifies what they need to achieve  and how they are going to meet those goals. The next stage involves surviving and establishing the business improving where needed. The business can look at growth or venturing into other industries, again identifying any requirements needed to go forward. The final stage involves the business coming to an end.

Within every organisation either public or private change takes place. This could be big or small but due to the amount of risk and finance involved in business change cannot be avoided. The Oxford Popular dictionary defines change as ‘to make or become different’ from this definition it can be seen that change can take form from both the organisation choosing to make the change or that a change cannot be prevented.

When an organisation chooses to make a change it can involve them trying to grow, become more efficient, generate a better profit and help provide a better product for the consumer.

Expansion is a common part of change as it can allow more money to be made, it can change the expectations of an organisation. Another way in which change is positive is to become diverse to allow it to target wider or different audiences and make greater profit.

External environments are important to organisations as they have large influences on how they run. These external factors can include technology, the economy, social, political and legal requirements.

The economy is changing organisation as it helps them to cater for satisfying the needs of the consumers. The factors of economic growth, unemployment and inflation influence how organisations set their targets, expenditure and growth.

Over the last 40 years legislation has had a bearing on how businesses operate, these include how they sell their product, treat their staff and also how they conduct business. An example within the last few years of this is within the Financial Services Industry, with the FSA becoming the governing body.

This meant that all companies within the financial services had to adhere to these rules & regulations. The majority of companies were forced to change the way they advertised, sold products and spoke the clients.

Social and environmental issues may force changes within organisations with more social & ethical issues present today. Over the last 20 years the environment has become more of an issue and with organisations showing social responsibility many have had to change the way they operate so that their more environmentally friendly or ethical.

Ford motor company has made the environment a big issue in the way they produce vehicles, recycling programs and finding fuel alternatives, they have took on board what the consumer wants and try to make this environmentally friendly, stating

‘We’re working to reduce the environmental impact of our products, while providing the utility, performance and affordability customer demand.’(Ford website 2005)