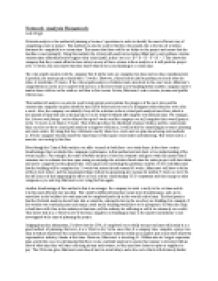 ﻿Network Analysis Homework Luke Briggs Network analysis is the method of planning a business? operations in order to identify the most efficient way of completing a task or project. This method can also be used to find the critical path, this is the line of activities that must be completed in a certain time. This means that there will be no delays in the project and ensure that the deadline is met promptly. Using this method, the critical path analysis has helped Morrison?s and southern counties constructions understand and recognise their critical path, in this case it is: B ? D ? E ? F ? H ? J. This shows the company that they cannot afford to have delays on any of these actions in their analysis as it will push the project over 51 weeks, this also shows that they know what to focus on finishing at a certain time. The critical path analysis tells the company that if all the tasks are completed on time and are done simultaneously if possible, the entire project should take 51 weeks. ...read more.

By doing this they will know exactly when to re-stock and can plan ahead using such methods as JIT, the company will also know the time frame it will require stock intake and labouring. This will result in a massive cost saving by the firm. Even though the Critical Path analysis can offer so much to both these case study firms, it does have certain disadvantages that can hinder the companies performance in this method and not show a true understanding of the events in place. For example, the entire Network analysis is based on estimates and guess work this means that if someone was to estimate the time span wrong or misjudge the activities finish time the entire project will slow down and not be completed at the planned date. One major issue involving this problem could be; If SCC tell Morrison's that the building will be completed in 51 weeks but instead it took around 61 weeks, Morrison's will have to delay all their stock orders and the supermarket/shop will not be generating any income for another 9 weeks as well. ...read more.

However, it is a 'blind victory' in the sense that, if a company does complete a project on time it will not know how the actual business and its revenue will fair in that areas market and it also won't know the supermarkets industry climate at that time. However, Morrison's is investing £1.1 Billion into its Largest expansion plan, and in this case it is detrimental that they create a network analysis to ensure their money is invested with an idea of what time they will start collecting income and revenue, as they may have loans to repay or suppliers to pay. The CPA also gives Morrison's and idea of how to avoid delays and extra costs which will obviously hinder the company and extend their £1.1 Billion budget further, damaging their finance statement. For this case study I believe Morrison's should use a network analysis in order to get into the southern market quickly, efficiently and with no delays, but bare in mind to use other tools in order to evaluate their planning after the project is completed and also before the project was started to estimate what the market would consist of, they could do this through a PEST analysis. ...read more.