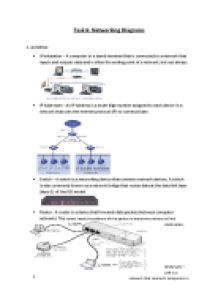 ﻿Task 6: Networking Diagrams 1. A) Define: 1. Workstation ? A computer or a dumb terminal that is connected to a network that inputs and outputs data and is often the ending point of a network, but not always. 2. IP Addresses - An IP Address is a multi-digit number assigned to each device in a network that uses the internet protocol (IP) to communicate. 3. Switch ? A switch is a networking device that connects network devices. A switch is also commonly known as a network bridge that routes data at the data link layer (layer 2) of the OSI model. 4. Router - A router is a device that forwards data packets between computer networks. The router reads the address of the packet to determine where its final destination. 5. WAN/LAN ? LAN is a network that connects computers in a smaller area such as a home. The difference between a LAN and a WAN are that a WAN is when two LAN?s are connected with a LEASED line that connects them. 6. Firewall ? Can either be software or hardware-based and is used to help keep a network safe. Its main objective is to control the incoming and outgoing traffic as it analyzes the data packets and determining whether it should be allowed through or not. 7. Server/Proxy Server ? operates on layer 7, 6, 3 of the OSI model 8. Star Network ? One of the most common network topologies. ...read more.

The VPN network is better described in part 2, basically being a private network utilizing public telecommunications (the internet). Through the VPN, we will be able to connect each of the store?s LANs together, allowing for wider-scale networking for the Dingo MobileCompany. Justification ? Taking into consideration that Dingo Mobile desires a connection between the store and the head office, I?ve selected a VPN network to cater for this. The VPN will allow DingoMobile to create a ?universal? network, and allowing the potential future stores to be connected also. How VPN fulfils future needs ?The VPN utilizes the internet, therefor it isn?t going to restrict the possible expansions that DingoMobile may require (being one of their future needs). If ever Dingo Mobile requires the sending of important data between head office/stores, the VPN will ensure that the data sent is encrypted, catering to the potential need for safety of transferred data. Considerations for the VPN ?The VPN should operate fine, and should continue to do so into the future. Since the VPN is created using the internet, so obviously things such as bandwidth, speed etc., may become an issue. Measures however can be taken to speed up the VPN, so it isn?t a vital issue that needs to be worried about. ________________ 3b) Development Process ? The existing system, from the information that I have been provided, basically includes no real networking (The information provided doesn?t indicate whether the store/office have actual networks setup individually, so I?m going to assume that they do not). ...read more.

4. Enabling Firewalls (Monitoring the Web Access at Firewalls) ? This builds onto the filtering URL/certain emails/files that are sent or accessed throughout the network. It allows you to monitor exactly what is being filtered, and keep track of related activity. EvaluatingtheNetworkSystem ?Methods must be utilized to also evaluate the health, speed and general performance etc. of the network, these methods will be used to evaluate the network system in periodical intervals, indicating to the business when and where maintenance must occur on the network system. 1. Benchmarking ? Certain programs can be used to compare the network against others in terms of performance. This would be a good indication to how DingoMobile?s network compares to other, similar networks. 2. CheckingtheNetworkUsage ? There are tools that the administrators can use, such as the ping function, to measure the network usage, and also the Round Trip Time. This can be a good indication to how the network is performing. 3. Reading through related Error Logs ? Reading the error logs relevant to the network will enable the reader to detect any issues, big or small, that may be occurring within the network. Checking this periodically will hopefully enable Dingo Mobile to pick up any problems occurring within the network. 4. Testing the Speed of the Network ? Sending files from one premise to the other using the VPN aspect of the network can be used to test the speed of the network, and this can then highlight if there is any issues such as packet-loss that are occurring, and hopefully allows DingoMobile to then find and solve these problems. ...read more.

This document is part of a wider set of coursework as indicated by the title (Task 6). The student has taken care to answer each section in reasonable detail and going as far as to include diagrams to further ...

This document is part of a wider set of coursework as indicated by the title (Task 6). The student has taken care to answer each section in reasonable detail and going as far as to include diagrams to further explain the definition of terms involved in computer networks.

One major issue consistent throughout the document is the mention of the OSI model. Despite describing which components belong to which layer, the student does not actually explain what the OSI model itself is.

The student is advised, that in future, when the main focus of a topic depends on a particular system or standardisation, that it is given a brief explanation at the very least (e.g. its significance).

Although not typically expected, the student could have included further reading material and references e.g. for the claim that a star topology is one of the most popular choices in implementing a network, and more importantly, why.

On the other hand, the student has however shown the appropriate analytical skills for this level of qualification, and in some cases, surpassing it by providing a consistent set of clear and concise definitions and functions for various networking terms throughout the document.

The quality of writing is inconsistent, often varying from formal to informal statements. The student is advised to adopt a more consistent and formal approach for future coursework. In addition, page numbers and a table of contents is recommended as it helps referencing the document and viewing specific topics.

As indicated above, the student has indeed used the technical terms expected at this level of qualification and exceeded expectations.

Numerous grammatical errors are present throughout the document along with the use of American English (e.g. ‘analyze’ as opposed to ‘analyse’). It is strongly recommended that for future coursework, the student makes full use of a British English spelling and grammar tool.