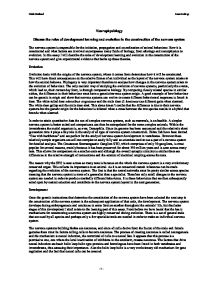 The pathway and target selection mechanisms are believed to be autonomous, activity independent. This has been demonstrated by work done on Ambystomid Urodeles (Twitty and Johnson 1934). The embryos were paralysed with TTX for a period of days until the larvae would normally move and feed for themselves. At that point the TTX induced paralysis wore off and surprisingly the animals soon began to swim and eat in a remarkably normal fashion. In the 1970's a theory developed that the innervation of muscles is largely at random, with patterns emerging later by the elimination of connections and cell death. This appears to be a very costly mechanism as neurones are being created only to soon be destroyed. This theory was abandoned when studies were performed on chicks (Landmesser 1978, 1980) and zebra fish (Eisen et al, 1986) that showed specific motor neurones innervate their target muscle with relatively few error from the outset. They possess unique identities that allow them to differentially respond to the choice point region, follow particular pathways and innervate specific muscle. Sperry first postulated the mechanism for the directionality of growth cone movement in 1963 when he suggested the chemoaffinity hypothesis. Neuronal growth cones were specifically guided toward their correct targets by specific chemotactic cues and proposed gradients of chemical labels. The neurones enhance and transduce the signals from the extracellular matrix to remodel cytoskeletal elements. ...read more.

It also appears that the protein CREB is required for functional plasticity but it is not sufficient for morphological plasticity. The changes to the gross structure of the nervous system in response to learning can be seen in an experiment performed on monkeys that were trained to preferentially use only some fingers. The cortical representation of those fingers expanded (Merzenich and colleagues). This has also been demonstrated with violinists who show a disproportionate representation of their left hand (fingering hand) when compared to their right hand (bow movement). Conclusions The roles played by each factor described here each have their own specific effect on the construction of the nervous system. The evolutionary aspect controls the "blueprints" of the nervous systems that are hard coded into the DNA of the animal. However it is not specifically the genetic makeup of the nervous system that natural selection acts against, rather the phenotype of the nervous system, which is the combination of the developmental and the learning factors. The evolutionary factors alter the genotype, the only source of variation that can be passed down to their offspring. The development can only attempt to recreate the layout as specified by the different alleles; it cannot exceed them in terms of functionality. The true source of variation depends on the extrinsic information obtained and stored in memory, but that us not able to cross generations (with the exception of tradition) and so could be an explanation for the high evolutionary conservation of the nervous system. ...read more.