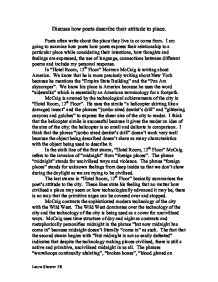 Discuss how poets describe their attitude to place.

Discuss how poets describe their attitude to place. Poets often write about the place they live in or come from. I am going to examine how poets how poets express their relationship to a particular place while considering their intentions, how thoughts and feelings are expressed, the use of language, connections between different poems and include my personal response. In "Hotel Room, 12th Floor" Norman McCaig is writing about America. We know that he is more precisely writing about New York because he mentions the "Empire State Building" and the "Pan Am skyscraper". We know his place is America because he uses the word "sidewalks" which is essentially an American terminology for a footpath. McCaig is amazed by the technological achievements of the city in "Hotel Room, 12th Floor". He uses the simile "a helicopter skirting like a damaged insect" and the phrases "jumbo sized dentist's drill" and "glittering canyons and gulches" to express the sheer size of the city to reader. ...read more.

McCaig contrasts the sophisticated modern technology of the city with the Wild West. The Wild West dominates over the technology of the city and the technology of the city is being used as a cover for uncivilised ways. McCaig uses time structure of day and night as contrasts and metaphorically personifies midnight in the phrase "but now midnight has come in" because midnight doesn't literally "come in" as such. The fact that the second stanza begins with "But midnight is not so easily defeated" indicates that despite the technology making places civilised, there is still a native and primitive, uncivilised midnight in us all. The phrases "warwhoops continually ululating", "broken bones", "blood glazed on sidewalks" and "harsh screaming" emphasises the brutality of the frontier. The statement "not so easily defeated" exaggerates the sense that this native reaction is always with us and could be unleashed at any time. ...read more.

He uses a second person pronoun "to you Ireland" then a first person pronoun "my Ireland", yet then goes on to personify his place, Ireland, as "both a bore and a bitch". My Favourite of these poems is "Hotel Room, 12th Floor" because it describes civilisation as it appears and not as it is. We appear to have changed, due to advances in technology, but we haven't, we are still the same savages as before and always will be. The idea of civilisation not existing appeals to me, technology is a cover up of reality, technology is all around us and created by us, but it means nothing in out uncivilised world. the poet feels towards his place. Due to how McCaig describes the violent side of the city, it makes me think that he has a distant relationship with his place. The phrase "Odi Atque Amo" by Louis McNiece defines the poets feelings in this case, it means to be attracted to and repelled by something at the same time. Laura Shearer 5R ...read more.