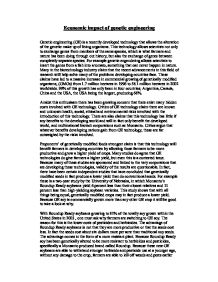 Economic impact of genetic engineering Genetic engineering (GE) is a recently developed technology that allows the alteration of the genetic make up of living organisms. This technology allows scientists not only to exchange genes from members of the same species, which is what farmers and nature has been doing through out history, but also the exchange of genes between completely separate species. For example genetic engendering allows scientists to insert the genes from a fish into a tomato, something that can never happen in nature. Many in the biotechnology industry claim that the recent advancements in this field of research will help solve many of the problems developing countries face. These claims have led to a massive increase in commercial growing of genetically modified organisms, (GMOs) from 1.7 million hectares in 1996 to 58.1 million hectares in 2002 worldwide. 99% of this growth has only been in four countries; Argentina, Canada, China and the USA, the USA being the largest, producing 68%. Amidst this enthusiasm there has been growing concern that there exist many hidden costs involved with GE technology. Critics of GE technology claim there are known and unknown health, social, ethical and environmental risks involved with the introduction of this technology. There are also claims that this technology has little if any benefits to the developing world and will in fact only benefit the developed world, and multinational biotech corporations such as Monsanto. ...read more.

As happened during the "green revolution" these small farmers would be forced to take out loans to buy this new technology, and if the technology does not deliver higher profits these farmers may lose their land. Even if a technology was developed that would bring the cost of production down to or below that of existing production cost, there is the issue of consumer preference. The increasing debate over genetic engineering has created a substantial difference in perception of the risks and benefits involved with GE food. Governments around the world, most notably members of the European Union have places restrictions and bans on many GMO products. Many of these countries are considering putting labels on products with GMO ingredients. Considering that many developing countries' economies are highly dependant on agricultural export, these countries can not risk the loss of major export markets. With pressure from the biotech industry, the United States, and the World Trade Organization some countries are become more lax on their restrictions on GE imports and regulations. The most recent example is the lifting of a moratorium on commercial GMOs in New Zealand on October 29th, 2003. While the governments of many countries are slowly lowering their restrictions on GE technology, many of the consumers in these countries are still highly opposed to the consumption of GMOs. ...read more.

Not only is GE implementation a bad idea for farmers from developing countries, it is already threat to many farmers who produce things such as sugar. Biotech firms are altering the genetic makeup of certain crops grown in northern climates to produce sugar and other derivatives, traditionally only obtained from crops grown in developing countries. With the development of this technology developed countries in the north will be able to grow products that they otherwise would have had to trade for. For example, coconut oil is naturally high in lauric acid. However it has become threatened by genetically engineered high-lauric acid canola oil grown in developed countries. While genetic engineering has been attacked on environmental, health and ethical grounds, it is clear that economically this technology will harm the developing world more than it can ever help. The technology is not being used to feed the world's hungry, nor does it need to be, distribution is the problem. Through patens and higher use of their own pesticides, GE technology has so far only been used to make biotech companies more money. The costs of implementing this technology are too high. With a higher investment in capital, and unknown returns in not something a low income farmer can afford. This would be especially costly if terminator seeds are implemented in developing countries, due to fear of patents not being honored in those countries. Developing countries should focus on more labor intensive production that does not leave them dependant on multinational corporations and the developed world. ...read more.