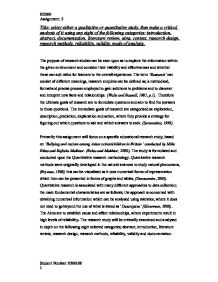 Select either a qualitative or quantitative study, then make a critical analysis of it using any eight of the following categories: introduction, abstract, documentation, literature review, aims, context, research design, research methods, reliability.

Title: select either a qualitative or quantitative study, then make a critical analysis of it using any eight of the following categories: introduction, abstract, documentation, literature review, aims, context, research design, research methods, reliability, validity, mode of analysis. The purpose of research studies can be seen upon as to explore the information within the given environment and consider their viability and effectiveness and whether these can add value for learners to the overall experience. The term 'Research' can consist of different meanings, research enquires can be defined as; a methodical, formal and precise process employed to gain solutions to problems and to discover and interpret new facts and relationships. (Waltz and Bausell, 1981, p.1). Therefore the ultimate goals of research are to formulate questions and aim to find the answers to those questions. The immediate goals of research are categorised as exploration, description, prediction, explanation and action, where they provide a strategy for figuring out which questions to ask and which answers to seek. (Sarantakos, 1993). Primarily this assignment will focus on a specific educational research study, based on 'Bullying and racism among Asian schoolchildren in Britain' conducted by Mike Eslea and Kafeela Mukhtar. (Eslea and Mukhtar, 2000.) The study is formulated and conducted upon the Quantitative research methodology. Quantitative research methods were originally developed in the natural sciences to study natural phenomena, (Bryman, 1988) this can be visualized as it uses numerical forms of representation which then can be presented in forms of graphs and tables, (Denscombe ,2003). Quantitative research is associated with many different approaches to data collection; the main fundamental characteristics are as follows; the approach is concerned with obtaining numerical information which can be analysed using statistics, where it does not need to go beyond the use of what is stated as 'Descriptive' (Silverman, 2000). The Aims are to establish cause and affect relationships, where experiments result in high levels of reliability. ...read more.

Research studies are expected to start with a literature review for varies of reasons. Firstly to get an awareness of existing literature in one's chosen field of research, to provide background information and understanding. Also to demonstrate the importance of the subject area, an understanding of what others have seen as the most important issues and theories. A literature review brings forth a generator of questions and dilemmas to be pursued in research, so in order to provide a context from which to go upon and build on through confirmed existing research or alternatively, to challenge existing understandings and argument.(Cano, 2002) Although the literature review within the research study has no separate heading from the introduction, the review of literature can be seen as rich in source, providing a range of various views of researchers. The literature review must be able to provide the reader with an up to date account and discussion of the research findings in a particular topic. (Cano, 2002). Within the introduction, the study has relevant research studies, questionnaires, surveys dated from 1985, The heartstone Odyssey (Eslea and Mukhtar, 2000.) to the latest of 1997 Olweus. According to (Cano, 2002) there are two vital points to include within a literature review, firstly; delineate the major and relevant theoretical position(s) pertinent to the research problem. Referring back to the research study, the researchers have defined many significant researches in relation to the study itself. The second point is to present summaries of prior research. This would include a review of how the variables have been studied and includes results, conclusions, and weaknesses. Well this can be seen successfully within the study, as the research has used many studies to build upon, for example the survey of racism in schools in Manchester by (McDonald et al, 1989 cited in Eslea and Mukhtar, 2000.) And on the other hand used studies to be criticized, such as the DfEE Sheffield Bullying project (Whitney and Smith, 1993Eslea and Mukhtar, 2000.) ...read more.

It must be recognised that certain issues have remained unexplained. For instance as extracted from (Balnaves and Caputi, 2001) were potential threats to internal validity reasonable ruled out or noted and discussed and was the time frame of the study described? Answer to these criteria's are no, it had not been. Also whilst focusing on the survey questionnaire, (Eslea and Mukhtar, 2000.) it has not been stated whether or not the questionnaire had been pilot tested or if there was anything that was within the survey that gave a bias response. Questions like what had been the return rate for responses from the schools and had there been any follow up with non respondents, and this could most likely reflect on possible limitations made in the discussions. It is unwise to assume that threats to validity and reliability can ever be erased; most rather that these threats can be attenuated by bringing to attention the importance of validity and reliability through the piece of research. (Cohen, 2000.) Documentation There are many different styles of documentation. Research studies could contain either an individual or combine form of documentation technique to show the use of other research within their own study. There can be four main styles of documenting, these are: The Harvard System, where the researchers name and date of publication is cited within the text. Secondly footnotes, the citing is done on the bottom of each page, with end notes in the same format but written in the end of a chapter or book. Finally the references and bibliography section where all the work which has contributed to the study or has been included within the research paper is listed accordingly to the authors second name in alphabetical order. The research study had used to Harvard system to document other research within the study, for example: when mentioning a research within the text it is stated as (Macdonald et al, 1989) as seen in (Eslea and Mukhtar, 2000. ...read more.