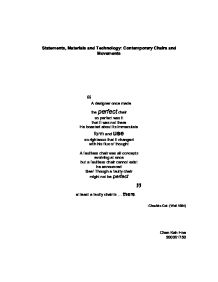 Statements, Materials and Technology: Contemporary Chairs and Movements "A designer once made the perfect chair so perfect was it that it was not there He boasted about its immaculate form and use so righteous that it changed with his flux of thought A faultless chair was all concepts evolving at once but a faultless chair cannot exist he announced See! Though a faulty chair might not be perfect at least a faulty chair is ... there." -Cheshire Cat- (Wall 1994) Chan Kah Hoe 300061750 Reactions and rebellions against the established academia of the generation has brought forth some of the greatest thinkers and advances in science and technology, stretching back to that Renaissance scientists and artists, Leonardo Da Vinci and Michelangelo, through to the Classicist doctrine of the 18th century. This linear progression marks the growth of human civilization. Experimentation of the new to establish an alternative to tradition has been a driving force in our progress as a species. More specifically, the hunt for newer, more effective materials to work with defines civilizations. Think the Stone Age through to the Bronze Age; the Industrial Revolution that marked the beginning of our obsession with mass production. This essay would chronicle the evolution of furniture of the past 70 years, beginning with the modern movement of the 1930s through post-modernism of the 1960s and concluding with ...read more.

By the early 1960s, what Robert Venturi saw was architecture devoid of humanity .The stripping of surface embellishment, deliberate ignorance of historical and regional tradition, and the assembly-line aesthetic were an abomination for Venturi (Zwirn 1996). Key characters in establishing new movement include, Robert Venturi, Verner Panton, whose room installations in Bayer's 'Visiona2' exhibition in Cologne were some of the most radical interior designs ever seen, and Aldo Rossi, architect and industrial designer. This became a precedent in anticipation of a new mainstream style that would be known as post-modernism, a term coined by Nikolas Pevsner in his publication, Studies in Art, Architecture and Design: Victorian and After, which was published in 1968. Post-modern furniture design would be defined by the extensive use of plastics. In fact it's hard to mention post-modern design without at least some mention of plastics and the connotations the materiality brought. With such a wide variety available to the designer, and an even more diverse ability to conform to what is required of it, whether soft and flexible to a rigid construction material, plastics were perfect for the outlandish designs of this era. A common theme throughout most of these designs is a narrative, either subtle or loud. The development of plastic technologies allowed for a much broader design vocabulary to be realistically produced. ...read more.

Operating from modest-sized shops, designing, fabricating and assembling, packaging, promoting and distributing their products in-house allows a far more flexible production schedule as their designs are made in limited runs. While there are wild new material choices in the 21st century, there are 4 or 5 new metals to work with that has been developed by the aeronautics industry alone, not to mention composites, an overall preference for older, more traditional materials. Due to their hands-on involvement of production, these designers tend to lean towards technology and materials that are more familiar and deliberately low-tech. Die-cutting, molding, welding and casting of plywood, metal, glass and concrete minimize complexity, ensuring the freedom to directly manipulate materials in any way. The desire to invoke the inherent qualities of the materials is a key issue in these designers' design intent. Contemporary design had synced with a faster paced society driven by the universal denominator of globalization. While not the ideal aspired to by the socially progressive early moderns, global consumerism has encouraged this infinite, often incoherent cacophony of styles. Yet a fresh stirring, inspired by the technological tradition of the current generation might hold the key to establishing this neo-modern movement. It is said that 90% of all good ideas have been done. Even if the current batch doesn't pick up on the last 10%, they're doing an excellent job rehashing the previous 90%. ...read more.