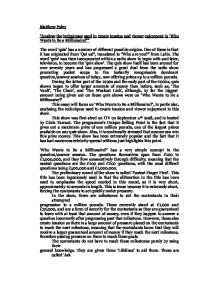 &quot;Analyse the techniques used to create tension and viewer enjoyment in 'Who Wants to Be a Millionaire?'&quot;

Matthew Foley "Analyse the techniques used to create tension and viewer enjoyment in 'Who Wants to Be a Millionaire?'" The word 'quiz' has a number of different possible origins. One of these is that it has originated from 'Qui es?', translated to "Who are you?" from Latin. The word 'quiz' was then incorporated within a radio show to begin with and later, television, to become the 'quiz show'. The quiz show itself has been around for over seventy years and has progressed a great deal from the radio show promoting pocket soups to the instantly recognisable dominant question/answer sessions of today, now offering prizes up to a million pounds. During the latter part of the 1990s and the early part of the 2000s, quiz shows began to offer larger amounts of money than before, such as, 'The Vault', 'The Chair', and 'The Weakest Link', although, by far the biggest amount being given out on these quiz shows were on 'Who Wants to Be a Millionaire?' This essay will focus on 'Who Wants to Be a Millionaire?', in particular, analysing the techniques used to create tension and viewer enjoyment in this show. This show was first aired on ITV on September 4th 1998, and is hosted by Chris Tarrant. The programme's Unique Selling Point is the fact that it gives out a maximum prize of one million pounds, one of the largest prizes available on any quiz show. ...read more.

This heightens the tension by revealing how nervous the contestant actually is, and is combined with other elements such as louder background music to intensify the tension as a whole. Another close-up used is of Chris Tarrant. This increases the tension as he can occasionally become nervous, indicating that there is high tension. The main close-up used, by far, is a close-up of the cheque in the host's hand. This is by far the most tension-increasing close-up as it shows us Tarrant's hand, the cheque, the contestant's hand and the immediate surroundings, these being the two computer screens and part of the chairs. This, added with the other close-up of Tarrant, the background music and the loud sound effects create an all-round tense experience. A different type of camera shot that is used occasionally on the show is a medium shot. A medium shot is a camera angle that is not as zoomed-in as a close-up, but is not as zoomed-out as a wide angled shot, resulting in an all round image. The most common medium shot used is one depicting the stage before the contestant comes to the seat, showing the remaining contestants who failed in 'Fastest Finger First', a small section of the audience, the surrounding stage and the host and the contestant walking towards the stage from the 'tunnel'. This heightens the tension as it shows the reaction of the audience during 'Ask The Audience' and reveals whether they know the answer or not. ...read more.

Chris Tarrant stresses that the show may be live regularly, and the confusion that this places into the audiences mind can cause tension. Repetition is used regularly throughout the show, with phrases such as "...but we don't want to give you that..." and "We'll take a break, join us again in a couple of minutes for the next part of tonight's 'Who Wants to Be a Millionaire?'" being heard throughout the show. This repetition is now well known and many people now know these phrases. These heighten the viewer enjoyment as many people now associate these phrases with this show, and can instantly recognise it purely from these phrases. The main phrase repeated is "Anyone can win", and this is stressed throughout the show, thus adding to the viewer enjoyment. In conclusion, "Who Wants to Be a Millionaire?" has been so outstandingly popular as it offers such huge prizes, amounting up to a million pounds, one of the biggest prizes of all time, and it is continually stressed that anyone can win this prize money. In my opinion, this show is an established ruler of the 'quiz show' format and can always bring in the ratings, even when it is criticised. There is no reason why a television quiz should not offer such large amounts of money if it is as popular as this, because this show brings in such massive viewers ratings that it should give out such large prizes. Ultimately, 'Who Wants to Be a Millionaire?' has evolved from an unknown show sinking into depression, into the commanding, profit-gaining, unrivalled tyrant of the 'quiz show' that it is today. ...read more.