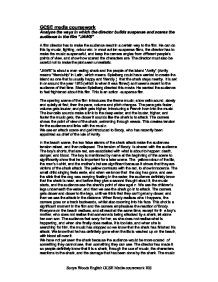 Analyse the ways in which the director builds suspense and scares the audience in the film &quot;JAWS&quot;

GCSE media coursework Analyse the ways in which the director builds suspense and scares the audience in the film "JAWS" A film director has to make the audience react in a certain way to the film. He can do this by music, lighting, colour etc. In most action-suspense films, the director has to make the music suspenseful, and keep the camera angles from different people's points of view, and show how scared the characters are. The director must also be careful not to make the plot seem unrealistic. "JAWS" is about a man-eating shark and the people of the island "Amity" (Amity means "friendship" in Latin, which means Spielberg could have wanted to create the island as one that is usually happy and friendly.) that the shark stays nearby. It is set in or around the year 1975 (which is when it was filmed) so it seems recent to the audience of that time. Steven Spielberg directed this movie. He wanted the audience to feel frightened about this film. This is an action-suspense film. The opening scene of the film introduces the theme music; a low cello sound, slowly and quietly at first, then the pace, volume and pitch changes. The pace gets faster, volume gets louder, and pitch gets higher, introducing a French horn into the music. The low cello sounds make a link to the deep water, and the louder, higher, and faster the music gets, the closer it sounds like the shark is to attack. The camera shows the point of view of the shark, swimming through weeds. This creates tension for the audience and links with the music. ...read more.

The mayor convinces the people to go into the water, making the audiences tension rise because they are going into the water, where the shark is. There was a false alarm, with two boys pretending to be a shark. The police and helicopters were all ready to shoot at the shark, and then the two boys came out of the water, one of the boys saying to the other "I told you this was a bad idea!" the police and everyone on the boats lower their guns. This is a humorous element, collapsing some of the audiences' tension. The audience knew that it wasn't a shark because there was no music. But everyone was scared when the woman saw the real shark in the pond. The children in the boat got pushed out of it with the force of the shark's attack on the man. We saw the man's leg that had been severed float to the bottom of the pond, which makes the audience know for sure that he is dead, and create thoughts of sympathy about that man's life and family. Quint (the experienced fisherman), Hooper, and Brody go out to sea on a boat. Hooper and Quint do not get along. This creates problems for them as any important decisions needed to be made quickly would not be cooperated upon fast enough, making them more likely to be killed. This could have also used for a comical element, as it is humorous watching people argue. When Brody was "chumming" - throwing shark bait into the water-, and wasn't looking behind him, the shark appears out of nowhere. The audience knew this was going to happen as the camera was focusing on the water more than Brody. ...read more.

The shark pulls the stick away and starts to swim about. Brody finds a compressed air tank, and when the shark goes in to attack him, he shoves it into his mouth. The tank only took up about a quarter of his mouth, showing how huge he was. The shark starts to swim away, and Brody starts shooting at the shark as it is getting away. We see a gruesome underwater shot of the shark and its mouth with the air tank, and bits of flesh from Quint. Brody shoots many times. The shark gets shot, but it doesn't seem to make any difference. He keeps shooting, and on his final shot he says "die you son of a..." and shoots. The bullet must have hit the compressed air, as the shark gets blown up into tiny pieces. We see Brody smiling, as parts of the shark are falling from the sky like rain. Hooper comes up, and Brody sees him and smiles at him. Hooper is happy also, as he knows that the shark has been killed. He asks about Quint and Brody's face falls and he shakes his head. The audience sympathise with them as they have lost a person that they had grown close to during their adventure. We see the two swimming to shore together with the aid of two of the yellow barrels they shot into the shark. The yellow shows them being victimised, and the innocence of them both. I think the second attack scene was the most effective and impressive, as the use of colour and the shared reactions of the audience and Brody are good. Over all, the film was very cleverly made (for that era) and created a lot of tension throughout. ?? ?? ?? ?? Sonya Woods English GCSE Media coursework 10S ...read more.