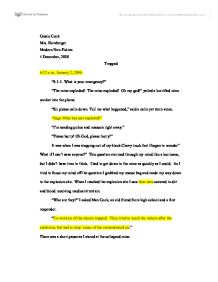 Cassie Cook Mrs. Homberger Modern Non-Fiction 4 December, 2009 Trapped 6:52 a.m., January 2, 2006. "9-1-1. What is your emergency?" "The mine exploded! The mine exploded! Oh my god!" yelled a horrified mine worker into the phone. "Sir please calm down. Tell me what happened," said a calm yet stern voice. "Sago Mine has just exploded!" "I'm sending police and rescuers right away." "Please hurry! Oh God, please hurry!" It was when I was stepping out of my black Chevy truck that I began to wonder" What if I can't save anyone?" This question stormed through my mind like a hurricane, but I didn't have time to think. I had to get down to the mine as quickly as I could. As I tried to focus my mind off the question I grabbed my rescue bag and made my way down to the explosion site. When I reached the explosion site I saw four men covered in dirt and blood receiving medical attention. "Who are they?" I asked Max Cook, an old friend from high school and a first responder. "Co-workers of the miners trapped. They tried to reach the miners after the explosion, but had to stop 'cause of the contaminated air." There was a short pause as I stared at the collapsed mine. "This is bad Dave, this is bad," Max told me as he shook his head. "What happened?" "That mine over there," he points, "exploded around 6:40 this morning." "Does anyone know why?" "We're pretty sure it was due to a build-up of naturally occurring methane gas. And get this, the mine had been cited for 46 violations of federal safety regulations during an 11 week review. It also received 185 citations from the Federal Regulatory Agency." "Damn, is there any communication at all? "Nope, all communications were destroyed in the blast." "Is there any sign of survival?" "All we know so far is that there are 13 men trapped in the mine, otherwise we have no idea." ...read more.

We had to work fast. Light was going to be fading soon. The hole was drilled to a point that we believed that survivors would retreat, and we repeatedly tapped on a steel pipe in hopes of hearing a response, if there was any. When a camera was inserted, we listened and watched to see if there was any trace of life. Everyone was still. You could have heard a pin drop a mile away. The intensity of the moment was profound. We waited and watched. Nothing was heard or seen. It was time to start thinking of ways to get into the mind and rescue the miners or recover their bodies. Our rescue team began to brainstorm when suddenly I thought of an idea. "What if we build another shaft?" I said. "I don't know, man," Dane Gans said with concern. "We have to think about the levels of methane and carb...' "We don't have time to worry about God damn gas. We can use oxygen masks" Josh Shields snapped. A moment of silence overcame the group, as we all looked around awkwardly. Philip Suddith, the leader of our group, stood up, "Well, there is no point in sitting and waiting around, that's the best and only idea we have, and we have no choice but to try it. Let's get the equipment and start. Time's a wastin'." An hour passed before we got all of the equipment we needed. Hours began to feel like minutes and minutes began to feel like seconds. I had never wanted the days to be longer more than I did that Monday. "This is going to be the best place to drill. It is the most logical place the miners would have gone to seek shelter here to get away from any harmful particles in the air.," said mining official David Hopkins. We began to dig. About 20 feet into the first shaft we were interrupted. ...read more.

After a few rigorous hours of digging we heard someone yell. "I found somebody! Help! I found somebody!" I ran over to the man holding a limp body. "Is he breathing?" I said frantically. "No man!" "Lets go, we have to get this man to a medic." The miner was taken to the medics. We later found out he had died from the blast of the mine. But we couldn't give up. We had to find the others. We were eventually given orders to continue digging. We were starting to advance faster than we had in the beginning of this rescue. We knew we were close to the men. After another few hours of digging I was overjoyed. "I can see through the wall!" I yelled out. "Everyone over here, we're going to knock this piece of shit down!" Everyone ran over to the place I was standing and began to hit through the wall. "I can see something guys! Holy shit I see something!" shouted Billy with joy. "We're almost there! Ha Ha!" Finally, the wall was broken and we saw a wondrous sight. The trapped miners had put-up a curtain like barrier to keep out toxic gases from reaching them. "They must be behind that curtain!" Max shouted. Frantically, we began to tear down the curtain. "There they are!" I shouted with thrill. "Everyone grab some one and carry them to the medics, fast! Get 'em out damnit! Get 'em out," yelled Philip. "Don't even check their vitals, just get 'em out!" I ran to the first guy I saw. I was completely on automatic, doing my job and taking care of the miner who was my responsibility. I made it to the top, exhausted, but hopeful. Watching the paramedics frantically trying to resuscitate my miner, I remember thinking "Please, God, please let this man live!" Epilogue After two days of waiting to be rescued, twelve of the thirteen miners died. The miners were found about 2 miles from the original blast site. The lone survivor, Randal McCoy, Jr. was reported to have slight brain damage due to lack of oxygen. ...read more.