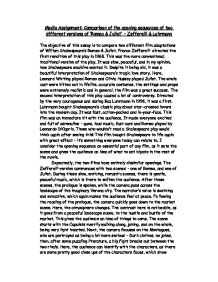 Media Assignment: Comparison of the opening sequences of two different versions of 'Romeo & Juilet' - Zefferelli & Luhrmann The objective of this essay is to compare two different film adaptations of William Shakespeare's Romeo & Juilet. Franco Zefferelli directed the first rendition of this play in 1968. This was the more conventional, traditional version of the play. It was slow, peaceful, and in my opinion, how Shakespeare would've wanted it. Despite it being old, it was a beautiful interpretation of Shakespeare's tragic love story. Here, Leonard Whiting played Romeo and Olivia Hussey played Juilet. The whole cast were kitted out in lifelike, accurate costumes, the settings and props were extremely realistic and in general, the film was a great success. The second interpretation of this play caused a lot of controversy. Directed by the very courageous and daring Baz Luhrmann in 1996, it was a first. Luhrmann bought Shakespeare's classic play about star-crossed lovers into the modern day. It was fast, action-packed and in-your-face. This film was an immediate hit with the audience. It made everyone excited and full of adrenaline - guns, loud music, fast cars and Romeo played by Leonardo DiCaprio. Those who wouldn't read a Shakespeare play would think again after seeing this! This film bought Shakespeare to life again with great effect - it's something everyone today can relate to. I consider the opening sequence an essential part of any film, as it sets the scene and gives the audience an idea of what to anticipate in the rest of the movie. Expectedly, the two films have entirely dissimilar openings. The Zefferelli version commences with two scenes - one of Romeo, and one of Juilet. ...read more.

and Tybalt (A Montague). The instant the camera focuses on Tybalt, the audience can clearly see that he is evil and arrogant - he speaks slowly and clearly - which also suggests status. He obviously wants to fight - it can be seen in his body language and facial expressions, whereas Benvolio is softer spoken, with a bit more fumbling. He doesn't make eye contact and from his look, it's clear to the audience that he wants peace. In Luhrmann's rendition, the costumes are extremely modern when compared with traditional Shakespearian costumes. In this film, the Montagues are the ones dressed in bright colours. They are clearly punks - pink hair and tattoos. The instant the audience sees them; they (the audience) can see that they are wild. The audience see the Capulets, in this film, as the gang that is to be 'feared' more. They are dressed in black, smart suits, metal studded boots and false metal teeth. Again, there is here a major contrast between Tybalt (a Capulet) and Benvolio (a Montague). Tybalt here speaks with a Latin - American accent, which immediately suggests to the audience that he's something to do with the Mafia. He is seen as evil - both through his appearance and his attitude - he has the mind to kill. Furthermore, his facial expression is very effective. The audience can clearly see that he is full of hate towards Benvolio. Benvolio, again is a lot more scared. He isn't as confident and outgoing as Tybalt. He speaks more softly, and from his facial expression, the audience can clearly see fear in his eyes. ...read more.

The Luhrmann presentation commences with some humour again - the Montagues are first shown joking amongst themselves in a car, this is the same when they reach the gas station and see the bus full of nuns. This, however, all changes when the Tybalt comes on to the scene. The audience can clearly see he is angry and full of hatred. When the camera then focuses on Benvolio, the audience, as I've previously mentioned, can see that he is the peacemaker here. When the fighting here, there is a lot of tension. This is broken up partly by some humour - one of the Montagues being hit with a lady's handbag, as he takes cover in her taxi. The close-up and extreme close-up shots of the characters show the audience the passion and emotions of the characters. This, in a way, allows us to feel the characters' emotions. Expectedly, the emotions in these two films are extremely dissimilar because they are both aimed at different audiences, and different audiences expect and enjoy different things. To conclude this essay, I would like to say that I thought the Luhrmann version had the more effective opening. It was quick, action-packed and in your face and contained props and landscape from my generation. This was the decisive factor, as I could identify with them. It held my attention, and was more gripping than the Zefferelli version, which, in my opinion, was aimed at an older audience. It was slower, had less drama, and old, Shakespearian props were used. True, it was a beautifully realistic adaptation of Shakespeare's tragic tragedy: Romeo and Juilet, but it just wasn't for me. I like films that are fast and full of action, but this was, as I've previously mentioned, slow. ...read more.