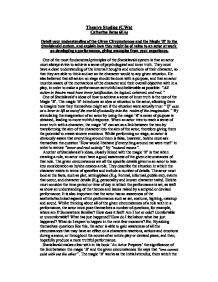 Detail your understanding of the Given Circumstances and the Magic 'If' in the Stanislavski system, and explain how they might be of value to an actor at work on developing a performance, giving examples from your experience.

Theatre Studies (CWa) Catherine Bates 6EAs Detail your understanding of the Given Circumstances and the Magic 'If' in the Stanislavski system, and explain how they might be of value to an actor at work on developing a performance, giving examples from your experience. One of the most fundamental principles of the Stanislavski system is that an actor must always strive to achieve a sense of psychological and inner truth. They must have a clear understanding of the internal thoughts and emotions of their character, so that they are able to think and act as the character would to any given situation. He also believed that all action on stage should be done with a purpose, and that an actor must be aware of the motivations of the character and their overall objective with in a play, in order to make a performance as truthful and believable as possible: "All action in theatre must have inner justification, be logical, coherent, and real." One of Stanislavski's ideas of how to achieve a sense of inner truth is the use of the Magic 'If'. The magic 'if' introduces an idea or situation to the actor, allowing them to imagine how they themselves might act if the situation were actually true: "'If' acts as a lever to lift us out of the world of actuality into the realm of the imagination." By stimulating the imagination of an actor by using the magic 'if' a sense of purpose is obtained, leading to more truthful response. ...read more.

By doing this, the actor is able to explore the role, looking at a variety of ways in which it could be approached, allowing them to finally decide upon a way to perform the piece which is most appropriate. Examples of elements of acting which would be affected by the actor/director using magic 'if' to explore a role would include for example, tone of voice, gesture, or use of physical or eye contact with other characters on stage. An example of using the given circumstances and magic 'if' to develop a role in a class activity would be when we looked at a section of the play 'Yerma' by Federico Garcia Lorca. We were concentrating on the entrance of Victor at the end of scene one, looking particularly at the relationship between Victor and Yerma. First of all, as a class, we compiled a list of all of the given circumstances and possible magic 'ifs'. The given circumstances were found by looking at evidence in the text as well as our knowledge of what had previously happened in the play, and what he have learnt about the character of Yerma up to that point. Some of the given circumstances included in our list were as follows: Juan has left for work, Yerma is cutting fabric for diapers, Yerma is childless and Married, Victor enters unbidden asking where Juan is, and Victor is unmarried. From here, we considered a number of different 'exciting suppositions', and came up with magic 'ifs' for the characters of Yerma and Victor. ...read more.

His performance is very static, as if he is worried to move just in case any more people notice. Sarah keeps her eyes on her script the whole time, looking as if she is suppressing laughter and does not want to look up in case she bursts into laugher and ruins the scene. She also rushes her words, speaking in a fairly low tone. Neither of them act as if they are in character, and are obviously simply trying to get the scene over and done with as quickly as possible, showing no consideration to the actual meanings of the words they are saying, and absolutely no feeling or emotion. This scene produced a lot of comedy, and it was interesting to consider the variety of different ways you could alter a performance completely by the use of the magic 'if'. By carrying out these various class exercises I have learnt that when creating a role for performance, in order to identify with a character to achieve a sense of inner truth, it can be very useful to get a good grasp at all the given circumstances that effect the role, and then, with the use of Stanislavski's magic 'if', explore the role by trying out a number of possible approaches to a scene or play. The magic 'if' works as an important link between the actor and the character they are playing by making the aim of the character the aim of the actor as well, meaning that, with this sense of purpose, and actor can give a more realistic and psychologically truthful performance. ...read more.