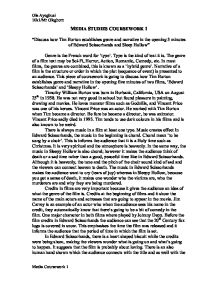 &quot;Discuss how Tim Burton establishes genre and narrative in the opening 5 minutes of Edward Scissorhands and Sleep Hollow&quot;

MEDIA STUDIES COURSEWORK 1 "Discuss how Tim Burton establishes genre and narrative in the opening 5 minutes of Edward Scissorhands and Sleep Hollow" Genre is the French word for 'type'. Type is the kind of text it is. The genre of a film text may be Sci-Fi, Horror, Action, Romantic, Comedy, etc. In most films, the genres are combined, this is known as a 'hybrid genre'. Narrative of a film is the structure or order in which the plot (sequence of event) is presented to an audience. This piece of coursework is going to discuss how Tim Burton establishes genre and narrative in the opening five minutes of two films, 'Edward Scissorhands' and 'Sleepy Hollow'. Timothy William Burton was born in Burbank, California, USA on August 25th in 1958. He was not very good in school but found pleasure in painting, drawing and movies. He loves monster films such as Godzilla, and Vincent Price was one of his heroes. Vincent Price was an actor. He worked with Tim Burton when Tim became a director. Be fore he became a director, he was animator. Vincent Price sadly died in 1993. Tim tends to use dark colours in his films and is also known to be weird. There is always music in a film at least one type. Music creates effect In Edward Scissorhands, the music in the beginning is choral. Choral mean 'to be sung by a choir'. ...read more.

In Edward Scissorhands, after the credits were shown, the film moved on to showing the audience a scene with an old lady and a female child which automatically tells the viewer that they are related-it's a grandmother and her granddaughter. In the scene, we see that the grandmother is telling a story, which is a typical convention of a fairytale genre. The room looks quite nice and cosy with lit warm fire. Peacefulness is what this makes the viewers feel because it's a safe atmosphere. This is a very essential part of mis-en-scene used in the opening five minutes of the film. The camera panned through the room to notify the audience what is in the scene/frame. As the grandmother in Edward Scissorhands started her story, we see Edward for the first time. The camera shot is an over the shoulder point of view. This is to create a sense of enigma. Darkness is a typical convention of horror. When Van Garrett finished writing the will and sealed it off, he went outside (night time) and entered a carriage. The night is dark and quiet. Along the roads are forests and the air is foggy. There are a lot of mists making the film even more mysterious. It also creates suspense and fear to the audience because it gives an unclear picture. We can hear is sound of the carriage wheel. The music is a diegetic sound and the effect it has is that it creates realism in the film. ...read more.

We see colourful houses. This surprises the audience because in the scene before, we see darkness and think of loneliness and emptiness but in short moment, we see light. The colours of the houses are bright and make us think of a safe community and togetherness. There seemed to be no life in the house upon the hill on the mountain but as we see this little community, there's happiness. This also makes the audience wonder how the hill might be connected to the houses. Are the people of this peaceful area in danger of some sort? Why is a hill like that, near a Suburbia area like this? The mansion is introduced in this scene by an Avon lady who after having a bad day selling her product saw the hill. The camera shot is from the perspective of the woman looking through the side mirror in her car. This tells us immediately that the woman is an important person in the film. Tim Burton has succeeded in establishing the genre and narrative in the opening five minutes of the two films. The way he used music in the beginning, the way he directed what is to be said (the dialogue) and the use of lighting, colours and camera shots are very professional and it shows that Tim Burton thought well on how he establishes genre and narrative in just the opening five minutes of films. He has shown that he thought of his audience. Ola Ayegbusi 10k1/Mr Gleghorn Media Coursework 1 ...read more.