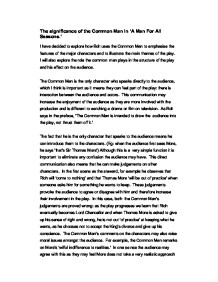 The significance of the Common Man in 'A Man For All Seasons.' I have decided to explore how Bolt uses the Common Man to emphasise the features of the major characters and to illustrate the main themes of the play. I will also explore the role the common man plays in the structure of the play and his effect on the audience. The Common Man is the only character who speaks directly to the audience, which I think is important as it means they can feel part of the play: there is interaction between the audience and actors. This communication may increase the enjoyment of the audience as they are more involved with the production and is different to watching a drama or film on television. As Bolt says in the preface, 'The Common Man is intended to draw the audience into the play, not thrust them off it.' The fact that he is the only character that speaks to the audience means he can introduce them to the characters. (Eg: when the audience first sees More, he says 'that's Sir Thomas More') Although this is a very simple function it is important to eliminate any confusion the audience may have. This direct communication also means that he can make judgements on other characters. In the first scene as the steward, for example he observes that Rich will 'come to nothing' and that Thomas More 'will be out of practice' when someone asks him for something he wants to keep. These judgements provoke the audience to agree or disagree with him and therefore increase their involvement in the play. In this case, both the Common Man's judgements are proved wrong: as the play progresses we learn that Rich eventually becomes Lord Chancellor and when Thomas More is asked to give up his sense of right and wrong, he is not out 'of practice' at keeping what he wants, as he chooses not to accept the King's divorce and give up his conscience. ...read more.

Exaggerated pleasure.) Why it's Sir Thomas More! In contrast, More treats the boatman in the same way he treats Cromwell- there are no indications of any changes in character. The boatman's language in this scene is especially significant to the major themes and plot: 'People seem to think boats stay afloat on their own sir but they don't, they cost money'. I think this is a metaphor for the situations in More's life. From the outside it may seem he lives a comfortable life just as it seems the boats stay afloat on their own. However, the play shows that More faces problems, which ordinary people did not always see. For example, in the previous scene, the audience would have witnessed the private conversation between More and Wosley, where they expressed conflicting opinions of the political situation of the time. In the1530s people were intent in ensuring the Tudors stayed in power as they had ended the wars of the roses and brought peace, this is Wosley's argument for the divorce of king Henry and Catherine of Aragon. More , however comments that Anne Boleyn 'is not his wife.' The boatman also makes the comment that the river is 'silting up', but with a 'deep channel' in the middle. The 'silting' seems to represent the fact that at that time in England, things were not running smoothly and mirrors the major problem Thomas More faces: Catholic king henry wanted a divorce from his wife, who was too old to have children, to produce a male heir. However, the Pope would not allow the divorce, which Henry was intent on receiving. The deep channel could represent the fact that Thomas More is 'getting out of his depth' by opposing the divorce, predicting disastrous consequences. This image of deep water is repeated in scene six, when the common man bribes Chapuys and Cromwell: 'The great thing's not to get out of your depth.' ...read more.

In one ending of 'A man for all seasons', the idea that evil is allowed to thrive is highlighted by the fact that Cromwell and Chapuys link hands and laugh at the end. Even though they were not friends throughout the play, their laughter here illustrates that the common man has allowed their evil to flourish, making it easier for them to create it- (rather rueful laughter of men who know what the world is and how to be comfortable in it) In the alternative ending, the Common Man ends the play by saying, 'if we should bump into each other, recognise me.' This quote is ironic, as it would be impossible to recognise him as he has played so many different roles. However, in most of these roles he has shown fundamental features such as dishonesty and has allowed evil to prosper. If the Common Man represents 'what is common in us all' then I think Bolt is trying to tell us we should recognise our own and other people's moral weaknesses. This is why it is important that that the Common Man shows familiar characteristics during the first scenes of the play. The Common Man also states in this final scene that it isn't difficult to keep alive, perhaps suggesting that staying alive isn't worth the guilty consequences? Overall, the Common Man is significant in terms of emphasising character and theme within the plot. His major role in the final scenes of the play is to show the audience that they are morally significant in their daily lives. He reminds the audience to stand up to people who have power and listen to their consciences, as they see the consequences of not doing so, after watching Cromwell and Chapyus succeed. It is ironic that the Common man begins the play by stating he is not significant as he plays a direct involvement in More's death, along with the powerful people such as Cromwell. He mirrors the belief that Alice has: 'Colds affect great men and common men alike,' ordinary people are just as significant as the powerful. ...read more.