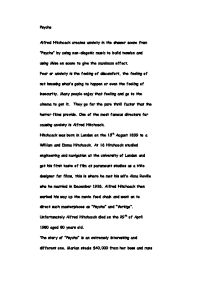 Psycho Alfred Hitchcock creates anxiety in the shower scene from "Psycho" by using non-diegetic music to build tension and using Mise en scene to give the maximum effect. Fear or anxiety is the feeling of discomfort, the feeling of not knowing what's going to happen or even the feeling of insecurity. Many people enjoy that feeling and go to the cinema to get it. They go for the pure thrill factor that the horror films provide. One of the most famous directors for causing anxiety is Alfred Hitchcock. Hitchcock was born in London on the 13th August 1899 to a William and Emma Hitchcock. At 16 Hitchcock studied engineering and navigation at the university of London and got his first taste of film at paramount studios as a title designer for films, this is where he met his wife Alma Reville who he married in December 1926. Alfred Hitchcock then worked his way up the movie food chain and went on to direct such masterpieces as "Psycho" and "Vertigo". Unfortunately Alfred Hitchcock died on the 29th of April 1980 aged 80 years old. The story of "Psycho" is an extremely interesting and different one. Marian steals $40,000 from her boss and runs away to be with her boyfriend Sam. ...read more.

Herrmann created some of the scariest music ever written, the theme tune from "Psycho" is contrapuntal music and it is a repetitive resounding tune. The sounds used in the shower scene are much more complex than what it first seems. The music in our extract is aggressive, screechy, tough harsh and creates a lot of different sounds using such a small variety of instruments. This builds tension and gives the "real hide behind your hands feeling". The noises in the shower scene, especially the water in the shower becomes a very uncomfortable sound even though its only water, it builds the feeling of not knowing and makes an audience very uneasy. The repetitive sound stays in an audience's head particularly when everything is silent when she is lying dead on the bathroom floor. Silence is used in two different ways in the shower scene; the first time is when Marian gets in the shower. She is happy and feels care free after deciding to go back and return the money. Hitchcock shows this with only body language and facial expressions, this silence is pleasant and happy. The second time in the scene where Hitchcock uses silence is when Norman Bates has just run into the bathroom to find Marian dead on the bathroom floor, this silence is tense and edgy. ...read more.

Editing can make or break a horror movie, it made "Psycho". Editing can make an audience feel calm and relaxed by using slow editing or make an audience feel uneasy using fast or frantic editing. Editing in the whole film is extremely effective, it builds tension and anxiety by using fast paced editing during the attack scenes and slow paced editing before and afterwards, Hitchcock these editing techniques before to build suspense and after the attack to give the audience some time to contemplate over what has just happened. Hitchcock uses montage editing in the shower scene to keep the audience focused on the screen and kept in complete suspense. It does this by putting brief shots together and creating an emotional impact. The editing is always parallel to what is happening, in the frantic attack they use frantic editing. Editing is used in the shower scene to build anxiety by printing key moments in an audience members head using fast paced editing; he builds suspense and time to reflect with slower paced editing. Alfred Hitchcock creates anxiety in the shower scene using mise en scene, cinematography, sound and editing I think Hitchcock created a fantastic film. "Psycho" combines tension, anxiety and a fantastic storyline using a variety of techniques to create maximum effect. ?? ?? ?? ?? ...read more.