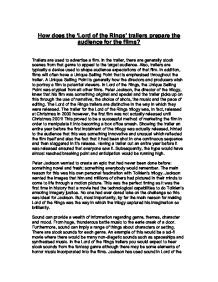 How does the 'Lord of the Rings' trailers prepare the audience for the films?

How does the 'Lord of the Rings' trailers prepare the audience for the films? Trailers are used to advertise a film. In the trailer, there are generally stock scenes from that genre to appeal to the target audience. Also, trailers are typically a device used to shape audience expectations of that film. In addition, films will often have a Unique Selling Point that is emphasised throughout the trailer. A Unique Selling Point is generally how the directors and producers wish to portray a film to potential viewers. In Lord of the Rings, the Unique Selling Point was atypical from all other films. Peter Jackson, the director of the trilogy, knew that his film was something original and special and the trailer picks up on this through the use of narrative, the choice of shots, the music and the pace of editing. The Lord of the Rings trailers are distinctive in the way in which they were released. The trailer for the Lord of the Rings trilogy was, in fact, released at Christmas in 2000 however, the first film was not actually released until Christmas 2001! This proved to be a successful method of marketing the film in order to manipulate it into becoming a box office smash. ...read more.

Furthermore, a forest is a conventional fantasy location making it relevant to the genre. In contrast, another lighting effect that is used in LOTR trailer is toplighting. This is in the scene when Galadrial is talking to Frodo. The lighting over her makes her appear angelic and the shade of lighting- a clear, white light- makes her seem innocent and pure. Her face is also completely lit up, therefore, she has nothing to hide and the audience will instantly deem her as a trustworthy character. An example of high key lighting is when, in the Shire, there is quite a bright, consistent light to make the place appear happy and peaceful as the 'before' time: before the ring caused trouble. The lighting effect makes the place seem as if it is almost too bright, too green and too perfect, therefore the audience presume that something is likely to go wrong. Additionally, it is a paradox that there could be such evil occurring in a place of such beauty. The lighting also makes the place seem like idyllic: a utopia. Colour is used symbolically throughout the trailer but one specific example comes to mind. The use of colour on the ring. It makes you assume that, because it is gold that it is of great importance and, because gold is a symbol of wealth it suggests to the audience that it is wanted and that it is precious. ...read more.

The Lord of the Rings trailers, to me, served their purpose well by using particular filmic codes to inform me of the genre of the movies, the themes explored and the plot that is unravelled through the duration of the trilogy. They are an effective way of advertising Lord of the Rings, especially taking into consideration the way in which the trailers were released. In my opinion, the most effective part of the trailers was at the beginning of the very first trailer when the ring is almost made out of fire and the shot jumps to a scene of the landscape of middle-earth. Pairing this with a narrative voice speaking ominously of the ring's powers and the fact that the entire fate of middle-earth rests on Frodo's shoulders makes it particularly effective because of the striking jump shot from fire to green foliage and mountains, which instantly makes this part stick in your mind. In addition, the booming voice is informing you of something essential that a viewer would need to know to understand the plot and the importance of the ring. Overall, the trailers effectively prepare the audience by giving them some details of the plot, setting and characters but not too much, thus giving the audience a need to view the film to discover more. ...read more.